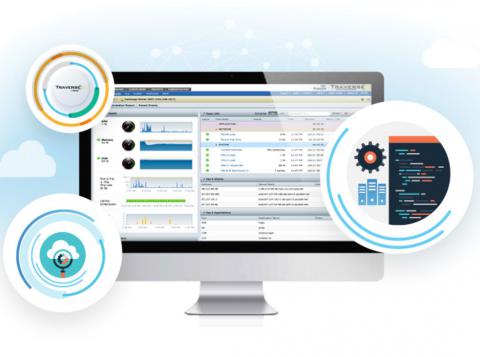 Due to reach market this quarter, the new release will integrate with Kaseya’s RMM solution to let IT infrastructure managers address technical issues and perform maintenance tasks through a single interface. By Rich Freeman
Tweet

Version 9.5 of Traverse, which will ship during the third quarter of the year, will also provide new device setup automation functionality and a revamped edition of the Panorama topology viewer with enhanced diagnostic and filtering capabilities.

The new tie-ins with Kaseya VSA will enable network administrators to run scripts, restart services, move files, and more from directly within Traverse. Users will also gain the ability to employ the Live Connect remote control component of VSA to connect with servers, desktops, laptops, and network applications without exiting the Traverse interface.

“You have the ability to view an environment and then take action on it,” says Sergio Galindo, general manager of the Traverse product group at Kaseya, which has dual headquarters in New York City and Miami. “Our customers have been asking for this for a while.”

The re-tooled version of Panorama is designed to accelerate troubleshooting by providing one-click access to status information about network devices.

“Many systems have you drill down until you find what the problem is or why a particular test set failed,” Galindo says. “We actually give you all that information once you click on the device right there in that view.”

Traverse 9.5 will also allow technicians to filter devices included in topology maps by type and location or the business service they support.

The new device configuration functionality in the forthcoming Traverse update will let administrators create “automation profiles” for specific kinds of hardware. Traverse has long been equipped to find, identify, and perform tests on network devices. Automation profiles add the ability to apply customized, pre-defined monitoring policies that can be tailored by customer, region, department, and a host of other attributes.

Linking Traverse to VSA is one step in a longer campaign to turn what is now largely a series of stand-alone management solutions into a fully integrated suite. Though he declined to specify timing, Galindo said that future Traverse releases would include direct connections to Kaseya Business Management Solution, the vendor’s PSA tool, and Unigma, the cloud management platform that Kaseya acquired in May.

Other managed service software makers are pursuing similar comprehensive integration projects. Autotask Corp., of East Greenbush, N.Y., for example, has been rolling out what it calls a “unification platform” since last year. And Tampa, Fla.-based ConnectWise, which invented the managed services suite concept, re-branded its solutions last November to emphasize their shared membership in a single, tightly integrated product family.

Through its “IT Complete” vision, Kaseya seeks to provide tools for both running and growing a managed services business. Help on the running side of that equation came most recently with the release in June of AuthAnvil MSP Protect, a new security system specifically for managed service and security-as-a-service providers. Assistance with growing a managed service practice came most recently with the introduction of new “go-to-market-in-a-box” kits designed to help MSPs launch new product offerings rapidly.

ChannelPro 5 Minute Roundup for the Week of January 11th, 2021
Why IT Is Still Great for Career Changers, Even Amid COVID-19
END_OF_DOCUMENT_TOKEN_TO_BE_REPLACED

Jabra PanaCast Review - Get Your Huddle On
END_OF_DOCUMENT_TOKEN_TO_BE_REPLACED