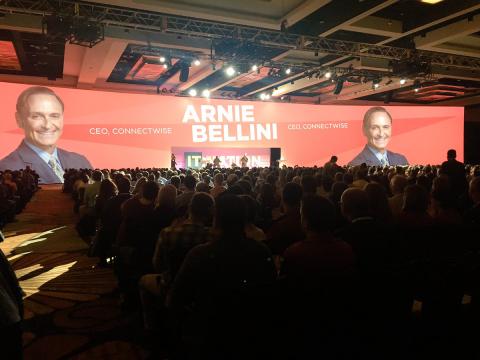 Announced at the company’s annual IT Nation event in Orlando, the changes are the latest step towards merging once separate managed services applications into an integrated suite. By Rich Freeman
Tweet

Tampa, Fla.-based software maker ConnectWise has officially rolled out a common interface for its suite of managed services solutions and re-named the products within that suite.

The changes were officially unveiled at ConnectWise’s annual IT Nation partner event, currently underway in Orlando.

According to CEO Arnie Bellini, the new product names highlight the fact that ConnectWise solutions are all members of an integrated suite, and also better convey the function each solution performs.

“We want them and their names to tell you what they do,” he said during a keynote address this morning.

Designed for readability and ease of use, the new column-based UI that ConnectWise has adopted across its entire product line further drives home that what were formerly separate systems sold by a common parent company are now a single, unified package.

“It’s really one company, one platform, and now one interface,” Bellini told IT Nation attendees.

The product now known as ConnectWise Manage was the first to utilize the revamped UI, which has been slowly making its way into the company’s other applications ever since. Bellini estimates that about 90 percent of the ConnectWise Business Suite now features the new interface, with the rest to follow soon.

That interface is more than just a cosmetic change to ConnectWise’s products, however. It’s also part of a larger, role-based design strategy to make technicians, sales professionals, and others as productive as possible by putting the tools and information they require at their fingertips, much like the controls on an airliner. As ChannelPro has reported previously, helping MSPs maximize employee productivity is a core UI objective at ConnectWise.

“That’s really the concept that we have is giving people super productive cockpits to work from,” Bellini told ChannelPro in a post-keynote interview.

Rolling out consistent names and interfaces is the latest step along a path ConnectWise has been treading ever since it began marketing its growing family of solutions as a Business Suite. Last year at this time, the company announced that it would replace its previously siloed product units with a unified reporting structure. Though the new UI and product names both reinforce the increasingly tight connections across ConnectWise products, Bellini emphasized that empowering customers to use the company’s systems alongside solutions from other software makers remains a high priority.

“Our job is to make sure that our solutions are the best solutions to help them get their job done,” he said. “If they’re not, then our partners are free to choose other solutions.”

According to Slutskin, however, the vendors responsible for those other solutions will have a hard time matching the depth of integration ConnectWise has achieved.

“When it’s our products, there’s just going to be a tighter interlock,” he says. “They’re going to fit tighter together just because they’re all under one roof.”

LG Gram for Business 17 (2020): Big Reasons to Like It
END_OF_DOCUMENT_TOKEN_TO_BE_REPLACED