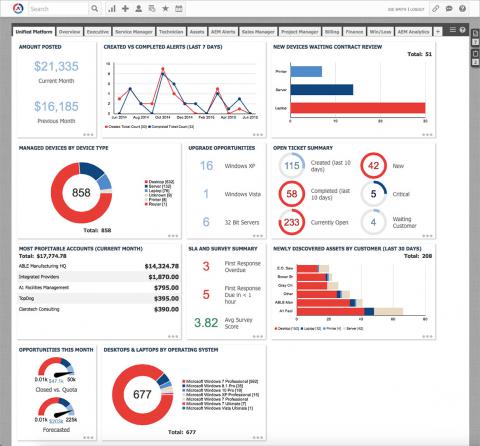 Unlike solutions that allow for the limited exchange of service and device data between otherwise stand-alone RMM and PSA applications, Autotask’s system provides bi-directional synchronization of real-time IT asset and ticket data, plus consolidated access to that information through one interface with a single sign-on.

“Essentially what we’ve done is we’ve taken the traditional model of sort of a tactical, arms-length integration for RMM into PSA and we’ve created more of a unified product experience and unified platform,” says Patrick Burns (pictured), Autotask’s vice president of product management.

Among the scenarios that deeper integration makes possible are the ability to view detailed device-level incident histories from within an alert, or to take remote control of a device from within a service ticket. According to Burns, not having to switch back and forth between systems when performing such functions saves technicians one to two minutes per ticket on average.

“Even for a small to midsized MSP, a minute a ticket is a lot of labor and cost savings,” he says, adding that the unified analytics Autotask’s platform delivers can be equally beneficial.

“Being able to analyze the diagnostics and device details directly in context with the service activity is a lot more valuable and meaningful then having to do them separately,” he says.

For example, Burns explains, Autotask users can now more easily identify which devices and device classes produce the most maintenance issues, or correlate SLA compliance figures with alert history information to see which end points have the greatest impact on service levels. All of that reporting is based on up-to-the-minute asset records, Burns emphasizes, due to the solution’s real-time asset inventory synchronization.

Though the new platform includes both RMM and PSA functionality, MSPs can still combine it with IT management or service automation software from other vendors if they wish.

“We will continue to allow them to make their own choices, but will sure do our best to make sure this is the best choice,” Burns says.

Autotask describes today’s announcement as a “marketing launch” for the new system, which quietly went into limited availability in February and general availability last month. The company wanted to operate the solution under real-world conditions at scale before calling attention to it publicly.

“We always do a lot of testing, but of course you can’t simulate everything in a test environment,” Burns says. Despite its significant underlying architectural changes, deploying and configuring the system typically takes a few hours. To date, Burns states, feedback from Autotask customers about the new platform has been positive.

“We’re really thrilled by the results we’ve had,” he says.

The RMM portion of Autotask’s solution is based on software the company acquired in September 2014 along with U.K.-based RMM vendor CentraStage. Work on the unified platform released today began about six months later, after Autotask had completed base-level integration of the CentraStage solution with its existing PSA application.

“We realized that there was a bigger opportunity,” Burns recalls. “Our view is that these two technologies really should be one product.”

Autotask will continue to refine the new system’s user interface and backend mechanics over the coming year, Burns reports. Major upgrades aren’t due until 2017, however, when the company will add deep functionality integration with its Autotask Workplace file sync and share application.

“Think of it as a kind of document management on steroids,” he says of the forthcoming offering.

Today’s product launch comes amid a wave of moves by managed service software vendors to build consolidated RMM and PSA platforms. Earlier this year, SolarWinds N-able announced that its N-central RMM platform now interoperates with its MSP Manager PSA solution, and Kaseya began shipping a PSA system alongside its flagship RMM solution shortly afterwards. ConnectWise, meanwhile, has been offering integrated PSA and RMM software for years, and more recently centralized its corporate reporting structure to drive even closer ties between those products.

Still, some MSPs worried about the risks associated with relying on one vendor for all of their management software needs continue to prefer using systems from separate providers. Only time will tell if the trend toward RMM/PSA consolidation proves as popular with managed service providers as it has with managed service vendors.