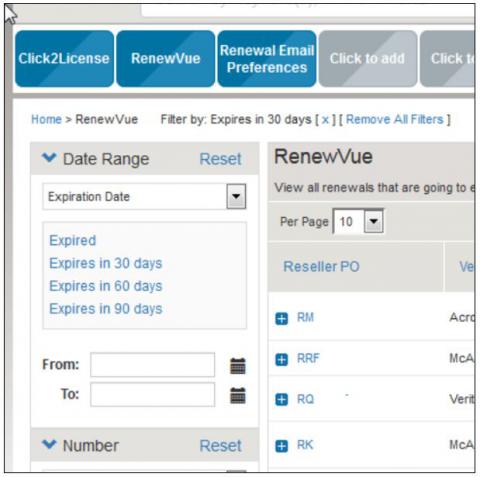 Ingram Micro is working on enhancements to its license management infrastructure aimed at streamlining ordering and renewals by incorporating reseller-specific special pricing in addition to standard rates.

The distributor discussed the forthcoming changes with ChannelPro last week at the 2019 meeting of its SMB Alliance community in Buffalo, N.Y.

Two of the revisions will impact RenewVue, the self-serve license renewal tool that Ingram introduced last October. At present, the system notifies users about pending expirations, but provides automated renewal quotes only for the roughly 25% of licenses in the system that involve standard pricing alone. A future RenewVue release due later this year will support special pricing as well, allowing the tool to supply a quote for every license in its database.

“[That] means we need to have special pricing all loaded and aligned, so that when a partner receives something, it’s a real quote that they can do something with,” notes Lynne Thornton, Ingram’s executive director of software and sales operations. Developers are in the midst importing the relevant data now, she adds.

A subsequent RenewVue update, also due this year, will allow users to convert a quote into an order immediately from directly inside the tool.

Though many partners have called RenewVue “a game changer,” according to Thornton, only about 400 use it in a typical month at present. That makes the system one of many resources Ingram considers underutilized.

“It usually takes about four hours. That’s our SLA,” she says. Giving members of her team immediate access to special pricing will allow Ingram to reduce that SLA to 30 minutes.