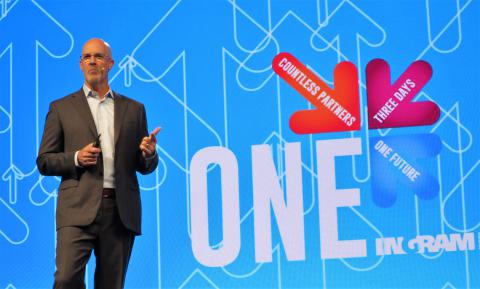 The Irvine, Calif.-based distributor announced the new systems this morning at its Ingram Micro ONE event, which is currently underway in National Harbor, Md., outside Washington D.C.

The sales management tool, called Partner Now, allows resellers to execute, track, and manage orders with multiple vendors through a single consolidated interface. The first, and so far only, vendor supported by the new system is Cisco Systems Inc., of San Jose, Calif. Additional vendors will join Cisco in 2019.

According to Ingram, Partner Now’s goal is to shorten and simplify what have historically been complicated order placement and tracking processes, especially with regards to Cisco.

“It can be complex,” said Kirk Robinson (pictured), Ingram’s senior vice president and U.S. country chief, in a keynote address this morning.

The new system includes end-to-end functionality stretching from quote generation to order creation to delivery tracking. In beta testing with resellers, according to Robinson, the tool produced dramatic time savings.

“We are taking hundreds of emails and days of phone calls and literally turning it into minutes,” Robinson says.

“You can get ahead of that, be in front of your end user, [and] introduce that cross sell,” she says.

Solutions like Partner Now and RenewVue are examples of what Robinson referred to in his keynote this morning as ongoing investments by Ingram in tools and processes aimed at enabling reseller profitability.

The company’s CloudBlue cloud marketplace platform, Robinson continued, is an even bigger example of that phenomenon. Introduced this spring at the 2018 Ingram Micro Cloud Summit and assembled from assets acquired with and from third-party vendors, CloudBlue cost over $500 million to construct. At present, the system supports more than 28 million seats responsible for over $1 billion of annual subscription revenue. Over 80,000 resellers globally currently use the platform.

“Nobody has put their money where their mouth is more than Ingram Micro,” Robinson said.

Helping partners transact business more easily with Cisco has a been a focus area for numerous big names in the SMB channel over the past year. Last November, for example, ConnectWise announced that Cisco would be one of the inaugural partners supported by Unite, its centralized third-party solution management platform, along with Microsoft and Amazon Web Services.