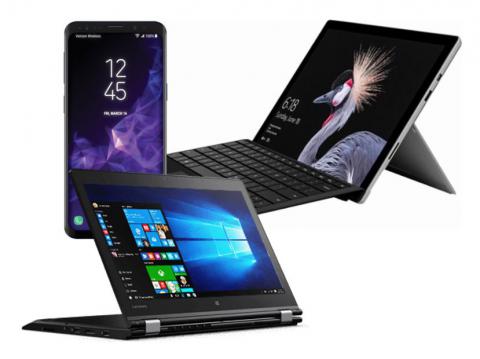 The distributor’s “Easy DaaS IT” program is the latest evidence of growing interest among SMB hardware buyers for subscription-priced procurement options that allow them to pay for hardware the same way they increasingly pay for software and services. By Rich Freeman
Tweet

The Harrisburg, Pa.-based distributor’s new “Easy DaaS IT” program allows end users to pay for notebooks, workstations, desktops, thin clients, and tablets from multiple manufacturers via monthly payments over 24- or 36- month terms. Subscribers receive deployment, device management, support, and lifecycle management services from D&H for the same fee, and can either return or upgrade devices at the conclusion of the contract.

Drawing on a “flex-up/flex-down” provision, buyers can also increase or decrease their DaaS hardware fleet by up to 10 percent after the first 12 months of the agreement.

The program is designed to let resellers realize revenue upfront on hardware sales while breaking down the barriers that often prevent cash-strapped small businesses from upgrading outdated devices by converting procurement from a capital investment to an operating expense. It also, D&H argues, positions SMB resellers to sell solutions like hosted services, mesh computing, and cloud-based storage that demand newer technology.

“Our resellers are always looking for new and effective ways to optimize their end-customers’ systems, delivering a network experience that incorporates state-of-the-art hardware, plus innovative and powerful services like cyber security or high-performance WiFi,” said Peter DiMarco, vice president of VAR sales at D&H, in a press statement. “DaaS is a savvy means by which the SMB VAR can realize this kind of an ecosystem for their customers. It offers considerable end-user benefits, creating not only a more affordable payment structure, but a more productive and modern computing environment, with on-demand technical support and logistics provided by D&H’s formidable team.”

Subscription-priced hardware procurement programs are also an appealing and familiar option for millennials, who are responsible for a growing share of SMB technology purchases, D&H contends.

The same logic that drove D&H to roll out a DaaS option has similarly inspired several of its competitors in the distribution space. Ingram Micro Inc., of Irvine, Calif., introduced its first DaaS program in August 2016, and broadened the contract options it offers in May of last year. Clearwater, Fla.-based Tech Data Corp., meanwhile, launched a DaaS offering of its own last December.

OEMs are steadily getting in on the DaaS act too. HP Inc., for example, unveiled its first DaaS program in June 2016, and added laptops, tablets, and smartphones from Apple Inc., as well as its own virtual reality headsets and workstations, in February. Microsoft unveiled a per-user, per-month acquisition program for its Surface devices in July 2016.