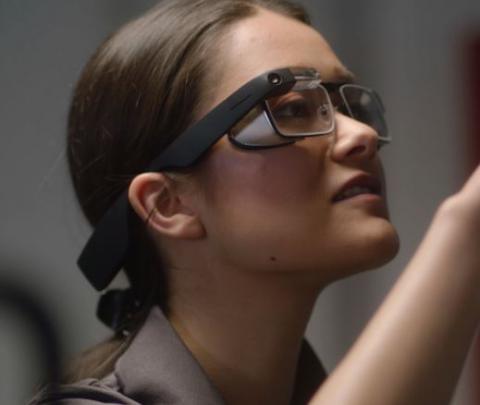 Adding Google Glass Enterprise Edition 2, a business version of Google’s augmented reality headset, to its catalog is part of a larger effort by SYNNEX to help partners include products originally meant for consumers in commercial solutions. By Rich Freeman
Tweet

The deal is the third in a series between the two companies aimed at meeting rising demand among SYNNEX partners for Google products, according to Rob Moyer, the distributor’s senior vice president of cloud services, mobility, and IoT.

“Google has a great brand, and the channel is realizing that that brand resonates with end users,” he says. Moyer spoke with ChannelPro this week at SYNNEX’s Inspire partner conference in Greenville, S.C.

A lightweight device no bigger than a conventional pair of eyeglasses, Glass provides hands-free access to productivity-boosting information directly in the user’s field of vision. Though it’s likely to be sold as a standalone product most often at first, Moyer believes Glass and headsets like it will eventually factor prominently in field service, training, and other solutions for businesses in the manufacturing, logistics, and healthcare industries.

“The evolution’s going to happen over the next 12, 18, 24 months,” he says. “You’re going to start seeing scenarios where mixed reality and augmented reality are really going to tighten up processes.”

SYNNEX has been offering Google’s G Suite productivity software to resellers since 2017, and seeing accelerating growth for that product among U.S. SMBs. A separate agreement announced in August added phones from Google’s Pixel family to the SYNNEX product catalog. According to Moyer, those devices have been selling well so far too.

“Pixel’s been a very good business,” he says. “It’s partly because it’s more than a phone. It’s a device on the edge of the network.” The same is true of Glass, the Nest thermostat, and a steadily growing number of other Google products originally intended for consumers.

“They’re just stacking all these products that end users are buying, and it’s turning into a commercial play,” Moyer says of Google.

Making offerings not typically thought of as business tools available to channel partners is a key element in Moyer’s plans for Stellr, SYNNEX’s online ordering platform for cloud, mobility, and Internet of Things products. In May, for example, Stellr became the first marketplace to offer Workplace by Facebook, an ad-free collaboration solution based on Facebook’s consumer platform, to U.S. resellers.

Formerly called CloudSolv, Stellr formally adopted its current name the same day word of the Facebook agreement became public. The goal, Moyer told ChannelPro at the time, was to prevent resellers from mistakenly thinking of the platform as a source of software-, platform-, and infrastructure-as-a-service offerings only.

Indeed, LTE routers suitable for use in edge computing deployments are “a huge business” for SYNNEX at present, according to Moyer, who spends a portion of his time continually searching for the next such nascent but promising opportunity. For years, he says, he’s been keeping a close eye on tech companies like Google with large R&D budgets.

“Then I align to what they spend their money on,” Moyer says.

Augmented and virtual reality are two of several examples. Sales of both technologies are modest at present, Moyer concedes, but poised for significant growth. “It’s like any adoption curve,” Moyer says. “We’re in the front end of mainstream adoption, but there’s enough traction that you know it’s going to be adopted.”

Welcome to the Year of the Predictable
END_OF_DOCUMENT_TOKEN_TO_BE_REPLACED

LG Gram for Business 17 (2020): Big Reasons to Like It
END_OF_DOCUMENT_TOKEN_TO_BE_REPLACED