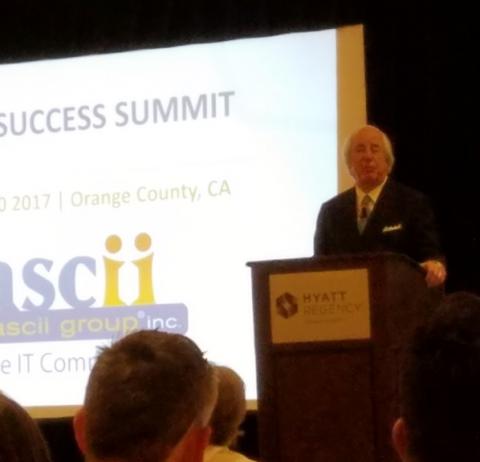 Frank Abagnale (pictured), whose real-life exploits were depicted in the 2002 film Catch Me If You Can, outlined the principles he uses to steer clear of identity theft at the second of the IT membership organization’s 9 events for 2017.

With concerns about cybersecurity generally and identity theft specifically haunting people inside and outside the world of IT, it's only logical that The ASCII Group Inc. has made one of the world’s foremost experts on forgery and document security the headline speaker for its 9 IT Success Summits this year.

That the expert in question also happens to be one of the world’s most famous con men and the subject of both a Hollywood movie starring Leonardo DiCaprio and a Tony-winning Broadway musical makes the logic behind that selection even easier to understand.

“We want to try to up our game at the events and increase the quality of the keynote speakers,” says ASCII Group president Jerry Koutavas. Hence the Bethesda, Md.-based IT membership organization’s decision to have Frank Abagnale, the improbable teenaged imposter whose exploits were depicted in Steven Spielberg’s 2002 film Catch Me If You Can, keynote all of its 2017 conferences, the second of which concluded today in Anaheim, Calif.

Abagnale began his presentation with a real-life recounting of the circumstances that led him to flee home at age 16, successfully masquerade as an airline pilot, doctor, and lawyer, and master the art of check forgery before doing years of prison time in France, Sweden, and the U.S.

“Hearing him speak about it and fill in the details that were not in the movie is incredible,” Koutavas says.

Hearing his advice on avoiding identity theft is compelling as well. Abagnale, who has worked with the FBI for over 40 years and currently serves as an elite consultant to businesses and governments worldwide, shared the basic principles he uses to safeguard his money and personal identifiers:

Content at this year’s ASCII summits spans beyond security into other topics of interest to channel pros as well, including sales and marketing. Frank DeBenedetto, president and chief technology advisor at Holmdel, N.J.-based MSP Two River Technology Group LLC and CEO of audIT Sales Presentation System, a vendor of cloud and managed service sales tools, was among several speakers to address those topics.