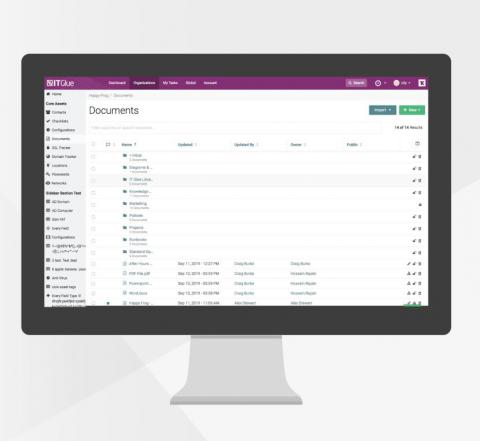 IT Glue has rolled out fresh enhancements to its documentation and automation platform for MSPs.

The new features arrived during the annual IT Nation Connect partner event that managed services software and services vendor ConnectWise held last week in Orlando. Chief among them is the ability to edit Microsoft Word, Excel, and PowerPoint files from directly inside the IT Glue interface.

“When you need to edit them or collaborate on them, you can click edit in IT Glue, edit them online, and it’ll save automatically back into IT Glue in real time as you’re typing,” says Nadir Merchant, general manager of IT Glue, which has been a business unit of managed services software vendor Kaseya since last December. “It just makes that whole process substantially easier.”

Users already had the ability to drag and drop Office files into IT Glue via a feature named Glue Files that debuted a year ago. The new functionality, officially called Office Cloud Editor, adds the ability to make changes without first downloading a file and opening it in the relevant Office application.

IT Glue hopes to add support for additional Office file types, including Visio diagrams, in the future. “Microsoft hasn’t built that functionality yet, and we’re hoping that’ll be coming out shortly,” Merchant says.

According to Merchant, adding support for inline file editing was no mean feat. IT Glue first had to become a certified member of Microsoft’s Cloud Storage Partner Program.

“We did that last year,” Merchant told ChannelPro during IT Glue’s GlueX event in Phoenix this September. “It took about a year and a half to get into that program. It’s a very rigorous process.”

IT Glue also needed approval from Microsoft before it could roll out Office Cloud Editor. Merchant hoped to officially introduce the new functionality during GlueX, in fact, but was still awaiting Microsoft’s final OK.

Another new IT Glue feature, called Vault, is a “host-proof hosting” technology designed to provide added security for encrypted end user passwords. At present, IT Glue protects the integrity of encrypted passwords by storing the passwords themselves, the key needed to decrypt them, and the passphrase required to access the decryption key in separate locations within the vendor’s server infrastructure. Vault allows MSPs to store decryption passphrases on their own hardware instead.

“This means that the IT Glue systems will not be able to decrypt that password,” Merchant notes. “The end user can control the encryption process.”

Scheduled to enter general availability in December, Vault is in limited release at present. IT Glue partners who wish to test the system can sign up for early access.

New functionality previewed during GlueX and now available lets MSPs who use IT Glue and self-serve password reset software from Quickpass capitalize on integration between those solutions introduced in July to export resets into Microsoft Active Directory with a single click.

ChannelPro 5 Minute Roundup for the Week of July 19th, 2021
END_OF_DOCUMENT_TOKEN_TO_BE_REPLACED

Jabra PanaCast Review - Get Your Huddle On
END_OF_DOCUMENT_TOKEN_TO_BE_REPLACED