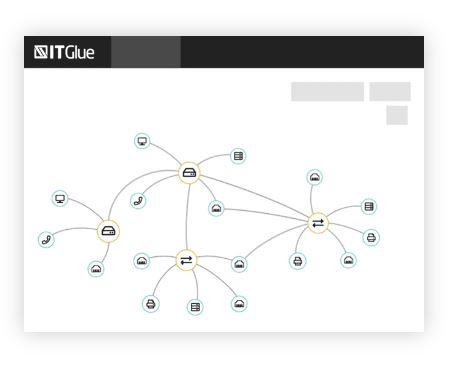 Called Network Glue, the new system automatically discovers, documents, and diagrams all of the workstations, servers, routers, switches, and other IP-based devices in an end user’s environment. By Rich Freeman
Tweet

Managed services documentation vendor IT Glue has introduced a network documentation solution that automatically discovers, documents, and diagrams all of the workstations, servers, routers, switches, and other IP-based devices in an end user’s environment.

Called Network Glue, the new system was announced today at IT management vendor Kaseya’s Connect IT conference in Las Vegas. Kaseya announced its acquisition of IT glue last December.

Once directed at an IP range by a technician, Network Glue automatically finds networked devices and matches them, where relevant, to existing hardware in a customer’s documentation. The system then produces a graphical topology map showing the relationships among all those systems.

Most MSPs execute such tasks by hand at present, according to Luis Giraldo, IT Glue’s vice president of product. “Sometimes there’s a lot of devices on a network,” he observes. “Documenting them manually is not always the best way.”

Network Glue automatically refreshes topologies and their associated documentation as well. That, too, is time-consuming work that many channel pros skip or overlook.

“People will do a basic network topology in Visio and upload it and save it and then probably never touch it again,” Giraldo says. “It’s just a lot of time and effort to pull it down, edit it, update it for one little change of a switch here or there, and then put it back up. So Network Glue keeps that topology map updated with ongoing discovery.”

The solution’s discovery process relies on SNMP queries rather than device-specific agents to find hardware, so it can identify more than just PCs and servers. “Anything that has an IP address or a MAC address could be potentially discovered on the network,” Giraldo says. “We can find printers and VoIP phones and wireless access points and TVs and other devices that are network connected.”

Network Glue is currently in limited release. “We want to get this into people’s hands, see where there’s opportunities to improve the platform, and try to understand what value it has for people,” Giraldo says. Interested users can sign up for a demo of the solution and download the current version at networkglue.com.

Giraldo expects Network Glue to enter general availability in approximately two to three months. Pricing for the system will be announced at that time.

Automating manual processes is a top priority for IT Glue at present. According to Giraldo, the company has been publishing scripts for documentation tasks on a GitHub page since last summer. “We’re trying to create efficiencies,” he says.

Though not specifically designed to be an Internet of Things management tool, Network Glue can help channel pros cope with the agentless devices popping up in mounting numbers at customer sites. “It’s a way to discover them and maybe document them and start to see what’s showing up,” Giraldo says.

Kaseya, IT Glue’s parent company, makes a network management product called Traverse that has been available both as a stand-alone product and as a deeply embedded component of the Kaseya VSA remote monitoring and management solution since last May. According to Giraldo, however, Network Glue performs different functions.

Getting Ahead with Standardization and Automation
END_OF_DOCUMENT_TOKEN_TO_BE_REPLACED