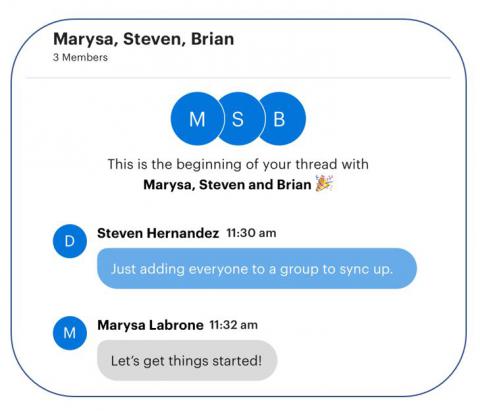 Announced alongside a new desktop application with significantly enhanced functionality, the company’s “business messaging” technology is designed to serve as an alternative to Slack and Microsoft Teams for organizations with less than 250 users. By Rich Freeman
Tweet

Cytracom has equipped its core unified communications-as-a-service solution with “business messaging” technology designed to serve as a lightweight alternative to Slack and Microsoft Teams.

That enhancement, along with a new desktop interface, made its official debut during managed services co-op The 20’s annual VISION conference, which is taking place this week in Dallas.

The new messaging functionality, which Cytracom previewed earlier this year, is available now at no additional cost to MSPs with a C2 contract, the higher of the vendor’s two subscription plans. Cytracom calls it a “business messaging” system because it expands beyond SMS to support text-based collaboration of the kind enabled by Slack and Teams.

“What we’re seeing when we talk to our partners is their customers are all moving towards team collaboration and team messaging services,” says Cytracom CEO Zane Conkle. “They’re seeing this demand organically, and we’re looking to help them service and fill that need.”

According to Conkle, business messaging fulfills that mission in a manner that bypasses the inherent limitations of SMS in areas such as attachment size without imposing the complexity of bigger solutions such as Teams.

“When we started talking to our partners, what we consistently heard is that Teams is complicated to manage,” he says. “If you look at Cytracom, our promise from the beginning has always been simplicity for our partners, and so we saw a huge opportunity to be able to come in and really do messaging in a different way and make it extremely easy for our partners.”

The new business messaging technology lets employees exchange text messages with a customer’s mobile phone via their business number rather than a personal line. Users can also send messages, documents, images, and other files to individual co-workers or “rooms” dedicated to ongoing group discussions. The system supports compliance-related data retention and comes with basic search tools that Cytracom plans to enhance significantly in the near future.

Those and the system’s other features are all that organizations with 250 users or less need, according to Conkle. “Teams has really been built for the enterprise,” he says. “[It] has a lot of bloat that’s not really relevant to our segment of the market, which confuses the user and encumbers the partner with additional layers of management that don’t really need to be there.”

Business messaging works both on the mobile app Cytracom released in April and on the vendor’s newly introduced desktop interface. Called Cytracom Desktop and available now to all subscribers, that tool provides far richer functionality than Cliq, the Windows desktop application it replaces, including access to call history data, profile information about other users, and voicemail management capabilities.

Forthcoming integration with Cytracom’s call center functionality, which is due shortly, will add the ability to view call queues and queue performance statistics, among other details. The ultimate goal, according to Conkle, is to build all of the Cytracom platform’s communications tools into Desktop.

“We’re taking all of the services that we offer, whether it’s voice messaging, call center, fax, and we’re bringing them all into a single application,” he says. A future release of Desktop currently in development, for example, will let users place and receive calls directly through their browser.

Jabra PanaCast Review - Get Your Huddle On
END_OF_DOCUMENT_TOKEN_TO_BE_REPLACED