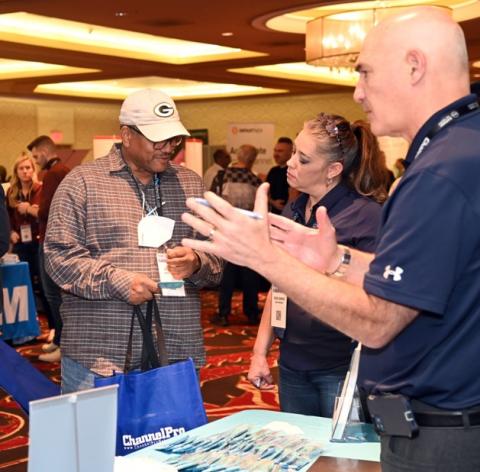 ChannelPro SMB Forums are a reliably good vendue for meeting with some of the tech world’s top vendors, and last week’s kickoff event for 2022 in Newark, N.J., was no exception. Unsurprisingly, given the appetite most channel pros have for technician productivity at present, many of the exhibitors at that show emphasized integration, within their portfolios and with third-party vendors, during conversations with ChannelPro. Here are five specific integration-related sneak previews worth knowing about.

1. Axcient Pursues Integration with RMM and PSA Systems
Having completed the rollout of x360, its integrated availability suite for managed service providers, Axcient plans to train its efforts going forward on integrating more closely with leading distributors and other MSP tool makers.

“You’ll see an increase in APIs for us to integrate with other partners, like the Pax8s or potentially RMMs or PSAs,” says Charlie Tomeo, Axcient’s chief revenue officer.

Without citing specifics, Tomeo indicated that new reporting functionality aimed at verifying compliance with required data protection best practices for outside auditors is also on the way, and that securing x360 from unending threat activity will remain an ongoing priority.

“The bottom line is protecting your data,” Tomeo says. “All these other things are important, but if we don’t do that one thing, good luck.”

Axcient’s x360 suite includes BDR, file sync and share, and cloud-to-cloud backup components. A direct-to-cloud BDR product introduced in 2020 is currently outselling any other product the vendor has shipped in the last five years, according to Senior Vice President of Product Ben Nowacky in a conversation with ChannelPro earlier this month about the recent addition of backup verification functionality to that system. According to Tomeo, that system’s simplicity and affordability have weighed heavily on channel pros normally concerned about the performance and recovery speeds of direct-to-cloud BDR platforms.

“A lot of MSPs are struggling to make money with backup,” he says. “They’ll actually take a loss in some features and functionality if they can make 30% more margin.”

Matching those margins is difficult for competitors with deep investments in older, less efficient BDR technologies, Tomeo contends. “They just don’t have the flexibility now to reset everyone’s price to what the market should pay today,” he says. “Their infrastructure that they have built out is just a lot more expensive.”

2. Dark Cubed Looks to Deeper Firewall Integrations and Analytics
Dark Cubed, which offers automated threat detection and blocking technology, is focusing on “better quality integrations with some of the firewall manufacturers,” including WatchGuard, Sophos, and Check Point, during the first half of the year, according to Vince Crisler, founder and CEO of the Alexandria, Va.-based company.

“We starting to work with [WatchGuard’s] internal team and their partnership program so that we’ll have a lot more support for WatchGuard across the board,” he says. “As we go into the second half of this year, you’ll be seeing more features around moving beyond just the firewall, in terms of supporting some platform-as-a-service and infrastructure-as-a-service stuff, and also some endpoint integrations.”