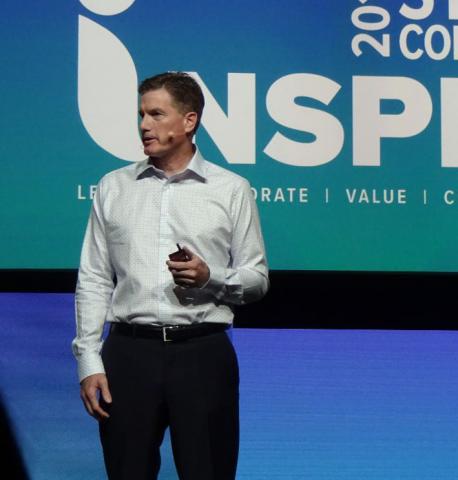 Trade negotiations between the U.S. and China roll on with no end in sight. Economists spy troubling signs of slowing growth. Brexit approaches. Sounds like a good time for a giant IT company to play it safe, right?

Not to the leadership team at SYNNEX, apparently.

“We really relish these kinds of times, because we think when there’s uncertainty we can really get more business, we can invest more in our company, and really grow our business overall,” said SYNNEX President and CEO Dennis Polk in a keynote address yesterday at the distributor’s 2019 Inspire event in Greenville, S.C.

And investing is exactly what SYNNEX is doing, he emphasized. “We’re hiring a lot more people in our company. Where we can’t grow organically, we’re going to do M&A as well,” said Polk, who spoke some two years after SYNNEX closed its purchase of networking, security, and communications distributor Westcon-Comstor.

According to, Senior Vice President of Marketing for North America Bob Stegner, hitting the gas in uncertain times is something of a tradition for SYNNEX. “That’s our style,” he said in an interview with ChannelPro. “We pounce on opportunities.”

The company is especially well positioned for stepped-up investment right now, he adds. “You can look at the numbers. We’re in a good cashflow position.”

Indeed, this year’s Inspire conference took place just days after SYNNEX reported eye-catching results for its third fiscal quarter, including a 28.6% year-over-year spike in revenue and an 83.5% leap in operating income.

“Virtually everything we announced last week was a record,” said Polk in his keynote, adding that SYNNEX is adding $2 billion a month to its top line on average at present and has expanded revenue at a roughly 14% CAGR over the last five years. “We’re very proud of our growth rate, but it’s not going to stop.”

Examples of the investments SYNNEX is making include raising headcount by 8% (including 100 people in the U.S.) last year, dedicating $3 billion to active credit lines, and boosting inventory levels by 15%. “We run a tight ship in regards to our inventory, but we know that you can’t sell with empty trucks,” said Peter Larocque, the distributor’s president of North America Technology Solutions, in an Inspire keynote this morning. “We put a lot of inventory in our facilities to help you win.”

Stegner gives some of the credit for SYNNEX’s recent performance to accelerating adoption of the pre-assembled solutions in markets like mobility, security, and pro AV that SYNNEX has been introducing—and betting its future on—for years. “A lot of these solutions have been around for some time,” Stegner observes, adding that resellers have been selling them for some time too. “These companies are now really up to speed.”

Sales of cloud solutions are contributing heavily to SYNNEX’s success at the moment as well, according to John Phillips, vice president of U.S. SMB sales for the company. “Every month’s a new record when it comes to cloud,” he says. And not just because of Office 365 subscriptions, Phillips adds. SYNNEX is seeing increased adoption of pricier Microsoft 365 SKUs, as well as Microsoft Azure capacity. In fact, roughly 90% of the partners Phillips and his team support are doing at least some Azure business at present.