SkyKick Calls Security Management the Next Dimension of Cloud Management 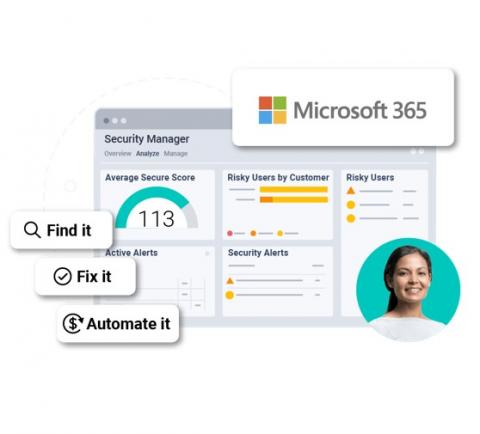 Security Manager, the born-in-the-cloud vendor’s latest product, reflects a growing realization that while managing an SMB’s cloud applications is a big job, securing them can be an overwhelming one. By Rich Freeman
Tweet

Managing an SMB’s cloud applications is a big job. Securing them is getting to be an overwhelming one, according to Evan Richman, co-CEO of cloud management vendor SkyKick. Most MSPs, he says, are small shops with limited expertise and a lot of threats to watch.

“There’s not 10 alerts,” Richman notes. “If you’ve got a thousand or two thousand users, you might have five or ten thousand alerts.” Isolating and acting on the ones that really matter can be like finding a needle in a haystack, adds Richman’s fellow Co-CEO Todd Schwartz.

“It’s just getting increasingly difficult to keep up with the complexity, the scale, and the pace of doing that properly,” he says.

Security Manager, the most recent addition to SkyKick’s portfolio, is designed to ease that challenge for Microsoft 365, a SaaS workload that some 73% of channel pros either support now or will soon support, according to ChannelPro’s 2022 State of the Channel report. Launched late last month, the system offers a consolidated, prioritized view of alerts and vulnerabilities based on input from Microsoft’s cloud backend, along with recommended next steps. Step-by-step workflows then help users execute remediation measures automatically.

“You don’t have to be a security expert,” Schwartz says. “We basically have out of the box ways to just fix security vulnerabilities with the click of a button across thousands of scenarios.” A no-code interface simplifies the creation of custom workflows, he adds, noting that users can run workflows against one, several, or all of their clients at once.

Analytical tools in the system’s dashboard provide a breakdown of factors contributing to a given user’s Microsoft Security Score, as well as advice on what to do about them. Technicians can run reports to identify potentially dangerous issues like users without MFA in place too, either on demand or at scheduled intervals.

Security Manager is SkyKick’s fourth major product. The first was a data migration solution designed to help newcomers to Microsoft 365 and Google Workspace move on-premises data into the cloud. It was followed by a cloud backup solution in 2015 and a support desk automation tool named Cloud Manager in 2020. Though they’re both stand-alone systems, Security Manager integrates with and closely resembles Cloud Manager, according to Schwartz.

“There’s a lot of commonality,” he says, pointing to the workflow creation tool as an example.

The new product integrates with Microsoft Intune, Microsoft Endpoint Manager, and ConnectWise PSA (formerly known as ConnectWise Manage). Further integrations with popular RMM and PSA solutions are in development, as is a version of the dashboard that users can make available to their customers.

Both monthly and annual subscriptions are available at per-technician rates that SkyKick declined to specify.

Creating Security Manager is one of the ways SkyKick has deployed the $130 million it raised in a funding round completed last September. The company, which has roughly 300 employees serving over 30,000 partners worldwide at present, is part of a growing cohort of born-in-the-cloud management and security vendors that includes Augmentt, BetterCloud, JumpCloud, Nerdio, and Saaslio, the cloud management vendor acquired by Auvik last month.