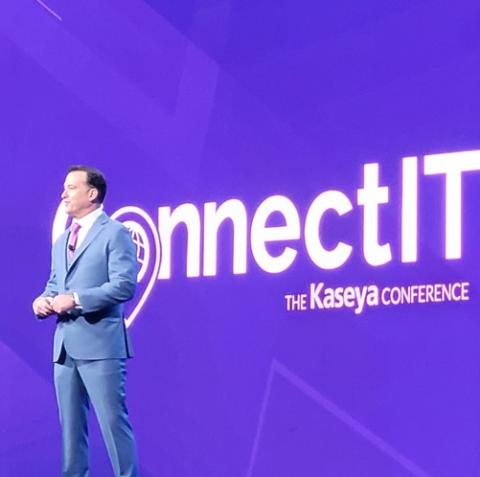 The IT management leader announced that product and previewed a forthcoming RMM release with support for IoT devices, cloud services, and other “non-traditional” endpoints during its Connect IT event in Las Vegas today.

Called the Cooper Intelligence Engine and set to be available in all of Kaseya’s solutions free of charge, the new AI-powered utilization service is designed to call attention to product functionality that users are paying for but not benefitting from.

“Cooper wants to make sure every single one of you as technicians, and as your organizations, are getting the most out of every Kaseya product that you can,” said CEO Fred Voccola during a keynote this morning.

Cooper, the new product’s namesake, is Voccola’s dog. “My dog is now making sure every Kaseya customer is more successful than they were yesterday,” said Voccola in a conversation with ChannelPro today.

The problem Cooper addresses is one shared by all software makers, Voccola added. “We spend a lot of money building really cool features and really important integrations into our products. Most of them don’t get used. The reason is because most people don’t have the time to become experts.”

Cooper addresses that issue by pointing technicians to features and capabilities they may not know about. MSPs that maintain credentials for clients in Kaseya’s IT Glue documentation platform, for example, might receive a suggestion to encrypt those passwords in IT Glue’s Vault feature. The system will notify technicians of training courses they should consider as well, and flag potential problems in need of investigation, such as a user who hasn’t logged in for six months.

“Is he still there, or do you have an active user account that you never disabled?” asked Mike Puglia, Kaseya’s chief customer marketing officer, during a Connect IT keynote.

None of Cooper’s recommendations, Voccola emphasized, will be intrusive. “Cooper’s not Clippy,” he said.

Kaseya expects Cooper to have a tangible impact on MSP productivity. “We think that Cooper alone will allow a 10 to 15 percent increase in technician efficiency by pointing out the most powerful aspects of the Kaseya kit that customers have but aren’t using,” Voccola told ChannelPro, adding that the system’s suggestions will provide roughly the same value as a month of technician training every year.

Voccola also showcased the next edition of Kaseya’s VSA remote monitoring and management system, version 10, this morning. VSA X, as Kaseya is calling it for marketing purposes, will include support not just for PCs and servers as in past releases but for mobile devices, networking gear, printers, IoT devices, and native cloud applications as well.

Kaseya first disclosed the underlying framework for the new system, which is scheduled to reach market in November, early last year.

Unconventional endpoints like medical devices, video surveillance cameras, and smart thermostats are rapidly proliferating in end user environments, posing multiple challenges for MSPs. “They’re connected, they’re networked, so they have to be managed, they have to be secured, and that’s a fundamental shift,” Voccola says.

ChannelPro 5 Minute Roundup for the Week of January 23rd, 2023
END_OF_DOCUMENT_TOKEN_TO_BE_REPLACED