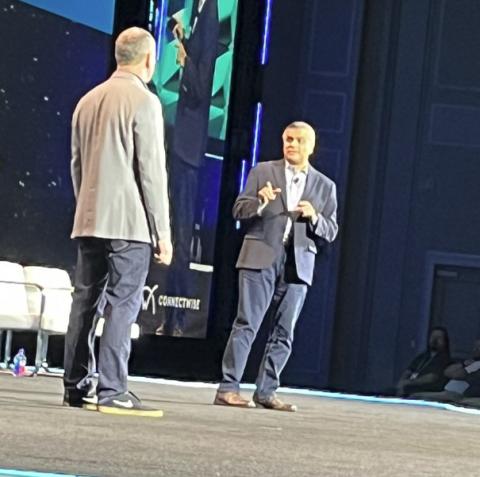 Ameer Karim (pictured right) and other executives discussed those plans, a slew of additions to the ConnectWise security portfolio, and the company’s ambitious vision for its next-generation Asio platform during this week’s IT Nation Connect event in Orlando. By Rich Freeman
Tweet

The managed services software and services leader discussed those plans, a slew of new additions to its security product family, and its ambitious vision for Asio, the next-generation platform it unveiled a year ago along with ConnectWise RMM, during conversations with ChannelPro and a product innovation keynote today at its 2022 IT Nation Connect event in Orlando.

Collectively, the RMM updates are designed to turn what is today a traditional remote monitoring and management solution into a “unified monitoring and management” (UMM) platform with integrated, automated support for everything from conventional endpoints to mobile devices, IoT hardware, virtualized resources, cloud infrastructure, SaaS applications, and networking gear.

“We do aspects of endpoints and we do aspects of applications [today], but what I want to be able to do is the full stack,” says Ameer Karim, executive vice president and general manager of UMM at ConnectWise. “Our vision is to be that single source of truth.”

Kaseya outlined plans to incorporate similar capabilities in the next release of its VSA remote monitoring and management solution, due shortly, during its Connect IT conference in June. N-able introduced a SaaS management solution in August and previewed a cloud infrastructure management system last month. Augmentt, JumpCloud, Nerdio, and SkyKick are among a growing crop of cloud management specialty vendors.

ConnectWise's forthcoming network management system, which is slated to reach users in January, will be based on technology from an unspecified third-party vendor that’s been integrated at a source code level with ConnectWise’s own programming.

“It’s not like you’re going to have to use somebody else’s tool,” Karim says. “You’ll be using [ConnectWise] RMM to manage your networks. You’ll see your firewalls, your routers, your switches, your network topology. You’ll discover it out of the box, everything, and you’re not paying any extra for it. It’s part of the package.”

ConnectWise is still evaluating whether to build, buy, or partner with an existing vendor on the SaaS management system, but is gravitating toward using a proof-of-concept prototype solution built in just three weeks atop Asio and available for viewing in the IT Nation Connect expo hall.

“The progress the team has made in a very short period of time is impressive,” Karim says.

The enhanced Intune functionality will add more robust, bi-directional capabilities to an integration that mostly imports and displays mobile device data at present.

“Today, the compliance information and all the devices that are enrolled in Intune show up in our RMM tool,” Karim says. “Where we’re taking it is to the next level where you’ll be able to see a lot more of the device details and take action on things.” Examples include the ability to get real-time alerts, manage device security policies, and modify configuration settings.

Intune will remain the foundation of ConnectWise’s MDM strategy going forward. “A lot of our partners are already using Intune,” Karim observes.

ChannelPro 5 Minute Roundup for the Week of January 23rd, 2023
END_OF_DOCUMENT_TOKEN_TO_BE_REPLACED