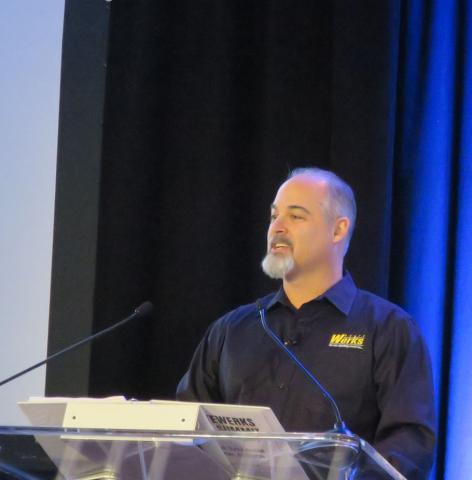 CEO John Lewe (pictured) also tells ChannelPro that he’s accepted an invitation from ConnectWise to attend this year’s IT Nation event and has no plans to participate in the vendor consolidation wave currently sweeping the industry. By Rich Freeman with Joel Zaidspiner
Tweet

QuoteWerks has introduced a cloud-based version of its quoting solution for service providers in IT and other industries.

Called QuoteWerks Web and four years in the making, the new system officially debuted this morning at the first annual QuoteWerks User Summit, which wraps up today in Orlando.

In its first iteration, the online quoting tool provides most of the same functionality as the desktop edition, according to John Lewe, founder, president, and lead developer of QuoteWerks parent company Aspire Technologies Inc.

“We’ve taken the basic essence of creating a quote and putting it out, and we’ve replicated that functionality,” he says.

The system imports information from a wide range of CRM and PSA solutions, and can write data back to the ConnectWise Manage PSA solution too. The ability to export data to both Norwalk, Conn.-based Datto Inc.’s Autotask PSA application and San Francisco-based Salesforce’s CRM platform is currently under development.

QuoteWerks also announced today that its QuoteValet online quote delivery and acceptance solution will soon gain ACH payment functionality that will enable users to pay for purchases via checks as well as credit cards.

The new feature will save users money as well as time, according to Brian Laufer, vice president and developer for QuoteWerks.

“They’re not getting those huge credit card fees,” he says, adding that those charges range from 2.5 to 3.5 percent on average at present.

Lewe revealed in a conversation with ChannelPro that QuoteWerks plans to attend the ConnectWise IT Nation conference in Orlando this year. ConnectWise announced last week that a handful of vendors previously barred from that event, which in addition to QuoteWerks included Kaseya Ltd., Continuum, SolarWinds MSP, and Autotask, are now welcome to come. ConnectWise CEO Arnie Bellini extended that invitation to his counterparts at all five companies personally, and Lewe says he’s accepted.

“It’s great that they’re opening it back up, and we did agree to go, mostly just because now it brings it back to where companies can go there, and they can see all their vendors,” he says. “It’s a good thing.”

Despite recent consolidation among managed services vendors, including most prominently Datto’s acquisition by a private equity firm and merger with Autotask, Lewe fully intends to keep QuoteWerks independent, even though he’s received “no less than three” buyout offers.

“In my opinion, most acquisitions don’t really end up helping the product,” he says. “Whatever the product was when it gets acquired, things don’t get better for their customers. Prices don’t go down. Nothing really gets better. Generally speaking, we’re not really open to doing that.”

Not accepting a merger or acquisition offer from a managed services vendor like Datto or Kaseya also positions QuoteWerks to receive customer references from, and provide them to, any such company in the industry, Lewe adds.