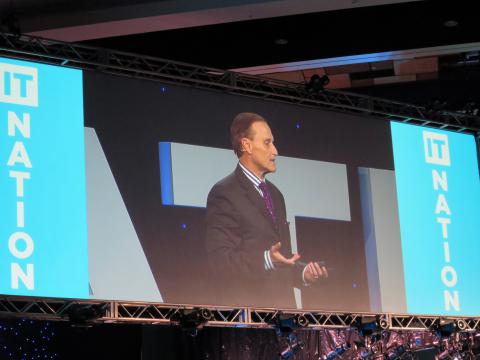 Automation Nation will now offer technical content for the entire ConnectWise portfolio, allowing IT Nation to focus on business best practices content. Datto, Kaseya, and other rivals formerly barred from those shows are now welcome to attend. By Rich Freeman
Tweet

Seeking to make attendance decisions easier for its partners and reinforce its commitment to collaboration with other software makers—including direct competitors—ConnectWise has revamped the content model for its Automation Nation and IT Nation events, and removed all restrictions on who is eligible to attend.

The Tampa, Fla.-based managed services software vendor announced those changes during the Q1 2018 meeting of its HTG peer groups unit, which is currently underway in Phoenix. ConnectWise acquired HTG, a best practices, coaching, and peer group vendor based in Harlan, Ia., three weeks ago.

Now in its seventh year, Automation Nation has historically delivered technical content about the RMM platform currently known as ConnectWise Automate and formerly known as LabTech, while IT Nation provided a mix of business and technical content covering multiple products. Going forward, Automation Nation will present in-depth, how-to instruction about the entire ConnectWise solution portfolio and IT Nation will focus on business growth and best practices information.

The change is designed to clarify which employees partners should send to which event. Starting this year, “technical operators,” such as technicians, service managers, and developers responsible for integrating third-party products with the ConnectWise platform should attend Automation Nation. Business owners, salespeople, and other non-technical “business operators” should attend IT Nation.

ConnectWise CEO Arnie Bellini expects HTG staffers to play prominent speaking roles at IT Nation, this year and beyond.

“There will be a good, healthy smattering of HTG knowledge and wisdom and content,” he says. “There’s a lot that we can take and learn from HTG and then apply it to the masses.”

Timing for this year’s events is unchanged. Automation Nation will take place June 18 to 20 and IT Nation will occur November 7 to 9, both in Orlando, Fla. The European edition of IT Nation will be held in London as scheduled too, from April 18 to 20.

All three events are now open to anyone interested in attending, including ConnectWise rivals. A small handful of competitors, including Datto Inc. (which officially merged with Autotask Corp. last month), Kaseya Ltd., QuoteWerks, and SolarWinds MSP had been barred from those shows in the past. According to Bellini, those restrictions were inconsistent with his company’s dedication to open APIs and open platforms.

Word of ConnectWise’s new event model arrives some three weeks after Datto announced plans to cancel the Autotask Community Live event scheduled for September and present the heavily technical content attendees would normally get at that show during its U.S. DattoCon partner event instead.