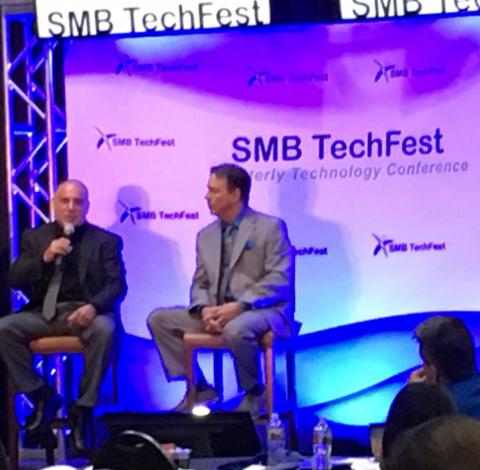 Speakers at the latest edition of the popular conference series discussed new market opportunities, as well as proven strategies for capitalizing on them profitably. By Rich Freeman
Tweet

Advice on what to sell, how to sell it, and how to price it profitably were all on order for attendees at the latest SMB TechFest event, which took place yesterday in Anaheim, Calif.

Like earlier conferences in the popular series, which is staged quarterly by Dave Seibert, a thought leader in the SMB channel who is also CIO of Irvine, Calif.-based MSP and solution provider IT Innovators Inc., the Q3 edition provided concrete tips on growing a technology business in an age of cloud-driven market commoditization. Seibert pointed to a panel session on adding voice services as a representative example.

“If you don’t have a VoIP practice, our goal was to share how you could establish one, and if you already have one, we wanted to show how you can kick it up to the next notch,” Seibert told ChannelPro.

Establishing a voice practice needn’t be terribly difficult either, according to panelist Anthony Polselli, CTO and CFO of Natural Networks Inc., a provider of managed network and business VoIP services in San Diego. Though his business took the comparatively laborious—and more profitable—route of constructing a voice offering from scratch and operating it entirely in house, entering the VoIP market can be as easy as partnering with a master agent.

“There’s lots of companies where you can just send them the business, and they cut you a commission check every month,” Polselli said.

Helping businesses upgrade their phones is a great way to establish a relationship that can expand over time into managed IT services as well, he added, as most companies update their switches, routers, and other infrastructure components in conjunction with a VoIP rollout to ensure high quality of service.

“I’m now starting to own the entire network layer,” observed Polselli, who noted that managing those assets can be a first step toward administering all of a customer’s servers, endpoints, and applications.

To help channel pros deliver services profitably, the SMB TechFest agenda also included a panel discussion on pricing strategies. Karl Palachuk, an author, consultant, and former managed services provider who participated in that session, advised his audience to avoid prospective customers who pressure you on rates and ignore what competitors in your local market are charging when setting prices.

“Pick the price range you want to be in and go find clients willing to pay that,” he said. “There’s no shortage of businesses out there.”

Palachuk urged attendees to raise their prices periodically as well.

“Don’t be too concerned that your clients are all going to walk away,” he said. “You’d be shocked how flexible your customers are on price if they love you.”

The fourth and final SMB TechFest of 2017 takes place October 18th and 19th.