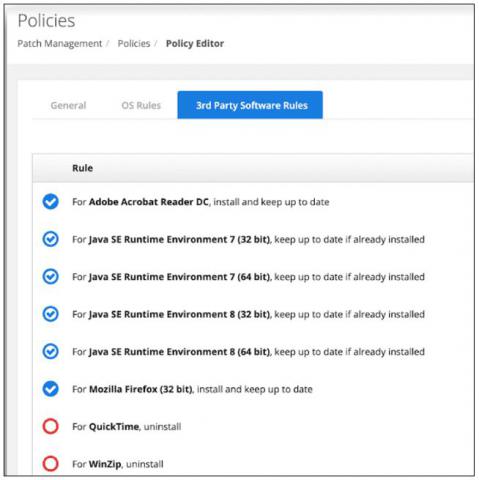 The new feature, which is available immediately, allows users to update systems like Adobe Reader, Mozilla Firefox, and Java Runtime Environment, among others, automatically at regularly scheduled intervals. It augments and shares a common interface with operating system patch management functionality that Pulseway introduced last September.

“This for us feels like a natural progression when it comes to providing our customers with all the security tools they need to make sure their end customers are protected and fully up to date with the latest software,” says Marius Mihalec, who is CEO of MMSOFT Design Ltd., the Irish vendor that makes the Pulseway platform.

In addition to updating previously deployed applications, Pulseway’s new solution can install software that end users don’t yet have on their workstations but should, or remove systems like iTunes and QuickTime that shouldn’t be present.

At launch, the solution supports 19 third-party applications. In addition to the products mentioned above, those include TeamViewer versions 13 and14, WinZip, and VMware Workstation Player. Support for nine additional systems, including Dropbox, Google Chrome, and Skype, arrives next week.

Pulseway plans to incorporate patches for 10 to 15 further systems every two to four weeks on an ongoing basis going forward. “Obviously this is never-ending work in progress, as you can imagine, because we need to keep up to date with all the new releases for all the software titles we support,” Mihalec says.

Engineered for maximum simplicity, according to Mihalec, the new tool lets users schedule application patching to happen daily, weekly, or monthly. The system can patch OSes at the same times or at different ones, based on an MSP’s preference.

Pulseway tests all patches, both manually and with the help of automated tools, before rolling them out to customers.

To defray the cost of building, maintaining, and testing a growing library of patches, Pulseway will charge MSPs who utilize the new functionality a flat incremental fee. The amount will vary based on which Pulseway plan a customer uses, but won’t exceed 30 cents per month per endpoint.

According to Mihalec, the decision to add support for applications to a patching module that updated operating systems alone until now comes in response to requests from customers. Future enhancements planned for the new tool include the ability to receive notifications about critical vulnerabilities that should be patched between scheduled update cycles and support for custom-coded solutions.

Sophos Says Attackers are Ganging Up on Victims
END_OF_DOCUMENT_TOKEN_TO_BE_REPLACED