Optimism and Wariness Among Datto Partners as DattoCon 2022 Concludes 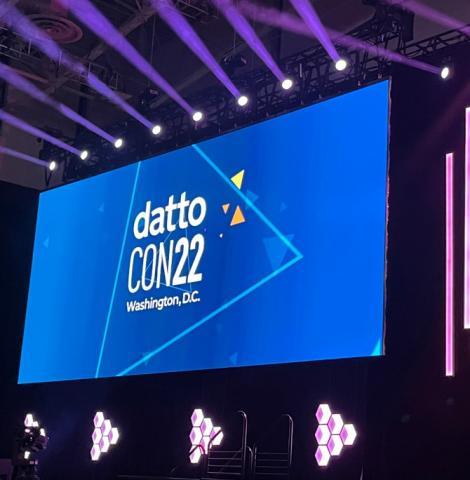 Kaseya CEO Fred Voccola has plenty of experience speaking before large audiences. But as he readily admitted early in the keynote he delivered at this week’s DattoCon partner event in Washington D.C., he was “a little nervous” about this particular speaking appearance.

“Any human being probably gets anxious before speaking, but this was a really important day and a really important message,” said Voccola in a conversation with ChannelPro, noting that the presentation was his first, best chance to explain the thinking behind Kaseya’s acquisition of Datto directly to the channel pros most impacted by that massive transaction after months of fear, uncertainty, and doubt.

Putting to rest widespread concerns among Datto partners that the products they use, technical support they love, and community they value are in danger was high on his list of objectives for the talk, which is why he spent some of it assuring his audience that Kaseya plans to invest in Datto’s products, people, support team, and partner program rather than cut them.

His biggest goal, though, was to articulate the strategic reasoning behind that $14 billion endeavor and why it will benefit Datto partners. Ultimately, Voccola insists, everything boils down to the one idea he most wanted his audience to take away with them.

“The strategy of Kaseya is to align our incentives with those of our partners,” he says.

What MSPs want, Voccola continues, is to spend less while doing and making more. What Kaseya wants is to sell as many of the components in its IT Complete platform to as many MSPs as possible. Offering partners a broad array of integrated solutions at prices designed to be one-third less than comparable alternatives, Voccola asserts, gets everyone what they desire.

Buying Datto feeds into that strategy, Voccola believes, in multiple ways. Kaseya comes away from the deal with more products to sell, including some in a market segment the company has never competed in before.

“We had, pre-Datto, zero presence in network infrastructure,” Voccola says. “No routers, no switches, no access points,” and nothing like Datto Secure Edge, the forthcoming SASE solution unveiled at DattoCon this week.

Datto partners, meanwhile, get BDR, RMM, PSA, and other solutions they’re already using for less money. Under a new rate chart that went into effect on the first of this month, net new licenses for Datto products now list at 15% less than before on average, according to Kaseya. Dozens of new source code-level integrations available today or under development, the company adds, will enable MSPs to lower operational overhead as well by accelerating managed services workflows.

Or at least that’s Kaseya’s destination for Datto. Voccola is the first to admit that getting there won’t be easy or happen overnight.

“I just want to be very clear, we’re going to make mistakes,” he said during his keynote Monday, but “I think we’re going to do more things right than we do wrong.”

ChannelPro 5 Minute Roundup for the Week of January 23rd, 2023
END_OF_DOCUMENT_TOKEN_TO_BE_REPLACED