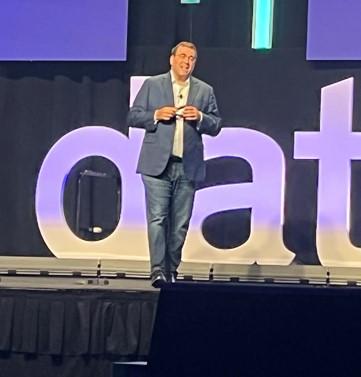 Speakers including security general manager Mike Puglia (pictured) announced those and other forthcoming products and updates during the DattoCon partner event today in Washington D.C. By Rich Freeman
Tweet

Kaseya, which has owned Datto since June, announced those and other forthcoming products and updates during this year’s DattoCon partner event today in Washington D.C.

Based on technology Datto acquired along with Infocyte in January, Datto EDR will feature out-of-the-box integration with Datto RMM, according to Mike Puglia, Kaseya’s newly named security suite general manager.

“Datto EDR will be available to all through our MSP portal, but if you have Datto RMM you can completely manage, deploy, and use it within Datto RMM without having to go anywhere else,” he said during a keynote this morning.

The new system, which is the first EDR solution from either Datto or Kaseya, is scheduled to ship in the fourth quarter of the year, with a target release date in November. Partners can sign up for early access to the product beginning in October.

The system will integrate with most anti-virus solutions, according to Puglia, and supports RocketCyber’s command and control app for the Microsoft Defender security platform. SOC analysts will add tickets with remediation instructions to a subscriber’s PSA system, where appropriate, after triaging incoming threats.

The new offering will be easy for partners to deploy as well, Puglia adds. “If you are managing a customer today, it should take you about 30 minutes to roll out and start managing that customer with 24/7 threat monitoring, not 30 days.”

Datto Secure Edge, a SASE solution designed to help distributed organizations with work-from-home employees provide secure remote access to cloud services, will also be easy to implement, according to Marcus Ward, the general manager in charge of Kaseya’s networking suite.

“It is simple, incredibly simple, to deploy,” he said this morning. “Literally within minutes, you can spin up a cloud service that allows you to control user security posture, control their access, wherever they’re working, wherever those workloads are.”

An early access program for the new solution is set to arrive in October.

According to Ward, Datto also has a new set of network switches with Power over Ethernet on all ports, 10G uplinks, and multigigabit capacity coming in the first quarter of 2023.

The new switches are part of what Kaseya CEO Fred Voccola called “huge investments” planned for Datto’s networking business during a keynote this morning. Voccola, who also discussed a wide range of other coming investments in Datto and its partners, added that supply chain slowdowns that have made Datto networking products hard to find since the arrival of the coronavirus pandemic will be eliminated by January of next year.

Other speakers this morning discussed enhancements to existing Datto and Kaseya products. Those include integration between IT Glue and Microsoft Intune that will allow MSPs to add information about mobile devices not supported by their RMM system to their documentation automatically.