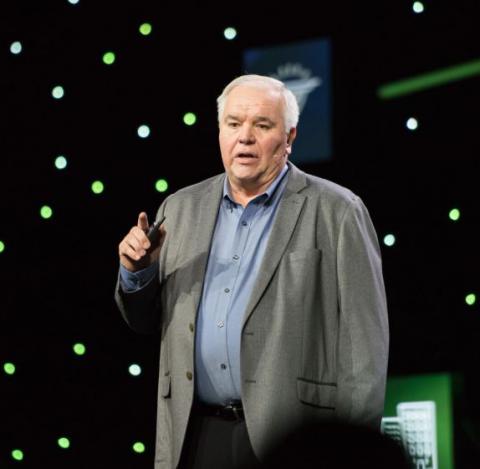 Other than having more funds and deeper resources at its disposal, the peer group, coaching, and consulting organization formerly known as HTG remains largely unchanged, according to founder Arlin Sorensen (pictured). By Rich Freeman
Tweet

Integrating two companies after an acquisition is always a complicated process. When one of those companies is a large software maker with a massive footprint in the SMB channel—like ConnectWise—and the other is a far smaller peer group, coaching, and consulting organization—like HTG—the adjustments involved are bound to be that much greater.

Just ask Arlin Sorensen, who founded HTG 18 years ago, solid it to ConnectWise in January, and now serves as the vice president in charge of the group under its new name, IT Nation Evolve. Arnie Bellini, ConnectWise’s CEO, is the first boss he’s reported to in 41 years.

“I’ve never worked for a company with more than 100 people, and when I did that I was in charge,” says Sorensen, who spoke with ChannelPro at the Q4 2018 meetings of HTG’s face-to-face peer groups, which are taking place this week in Orlando.

Somewhat to his surprise, though, the 10 months since ConnectWise acquired HTG and subsequently rolled it into its IT Nation partner enablement unit have been relatively painless. “It’s really been a lot smoother than we expected,” Sorensen says.

ConnectWise created the IT Nation group, which is led by Sorensen’s son Pete and oversees not only HTG but ConnectWise’s user groups and partner events as well, in August. That’s when it also gave HTG its new name. According to Sorensen, however, ConnectWise hasn’t altered much about HTG beyond that this year.

“They haven’t micromanaged or tried to change our direction,” he says.

Nor, Sorensen continues, have they sought to change the group’s culture. And while MSPs in IT Nation Evolve’s face-to-face peer groups have long been required to use the ConnectWise Manage PSA system, they remain free to run whichever RMM, quoting, and other line-of-business solutions they choose, despite fears to the contrary. Indeed, if anything, members could someday be permitted to pick their PSA solution too.

“We may drop the requirement completely at some point in the future,” Sorensen says.

All of that, he continues, should reassure members who were apprehensive about what comes next during HTG’s Q1 meeting in February, when Sorensen and Bellini promised to protect everything channel pros wish to preserve about the group.

“It was a wait and see attitude, there’s no question about that,” Sorensen says. “They wanted to believe it, but they’ve worked with a lot of big companies over the years and they’ve heard a lot of promises that never came true.”

From Sorensen’s perspective, though, all the ways joining forces with ConnectWise has changed HTG have been beneficial. “The resource investment that the company is making in supporting these partners is really through the roof,” he says.

The ConnectWise Booster program is a prime example of what he has in mind. Introduced by HTG last summer, Booster gives peer group members free access to ConnectWise Manage optimization services. Only a handful of HTG enrollees had completed the process as of the start of this year. Today 130 have, and ConnectWise has 10 consultants at work leading further Booster engagements.

ConnectWise Names Winners of Pitch IT Contest at IT Nation Explore 2019
June 16th, 2019