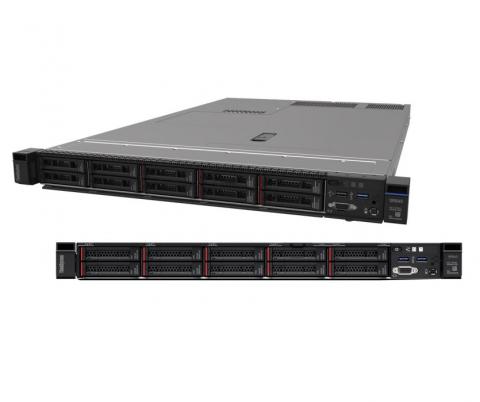 The new dual-socket ThinkSystem SR645 and SR665 are aimed at businesses that want to run advanced analytics, virtualization, artificial intelligence, and other performance-sensitive workloads at higher speeds with lower total cost of ownership. By Rich Freeman
Tweet

The ThinkSystem SR645 and SR665, both of which are dual-socket devices, arrive eight months after the introduction of the vendor’s single-socket SR635 and SR655 models, which also contain EPYC 7002 CPUs.

The two new units support up to 128 cores, accommodate up to 4TB of DDR4 memory, and utilize PCIe 4.0 technology to deliver what Lenovo says is double the I/O bandwidth of previous-generation servers. That, according to the company, makes them a strong fit for businesses in the financial services, retail, and manufacturing industries, among others, that want to run performance-sensitive workloads at higher speeds with lower total cost of ownership.

“Our new Lenovo ThinkSystem servers are designed for workloads such as in-memory databases, advanced analytics, virtualization, and AI,” said Kamran Amini, vice president and general manager of server, storage, and software-defined infrastructure in Lenovo’s Data Center Group, in prepared remarks. “With the exceptional power, speed and onboard storage of these new servers, our customers have the ability to handle the increasing data requirements of today’s workloads with the scalability to grow with their business.”

The 2U SR665 supports up to 20 3.5-inch drives, 40 2.5-inch HDDs, or 32 NVMe drives. Like its smaller cousin, it has one OCP 3.0 expansion slot, but provides up to eight PCIe 4.0 slots. The device can hold as many as six single-width 150W GPUs or three double-width 300W GPUs.
According to Lenovo, the new servers’ high core count helps users with demanding workload requirements conserve rack space, power, and money.

“The new Lenovo ThinkSystem two-socket servers tap into the power of our 2nd Gen AMD EPYC processors to make a meaningful impact in the areas where performance, space and efficiency are critical to business outcomes,” said Dan McNamara, senior vice president and general manager of AMD’s server business unit, in a media statement. “With the expansion of its AMD EPYC-based product line, Lenovo customers now have more options for systems that address today’s demanding enterprise workloads.”

The company also announced financial stimulus measures, including a more predictable flat-rate incentive scheme with faster payments and extended credit terms, in a bid to help resellers with cash flow challenges due to the coronavirus pandemic’s economic impact continue to close deals.

ICYMI: Our Channel News Roundup for the Week of April 5th
Advance the Cybersecurity of Your Tech Business with CompTIA Membership
END_OF_DOCUMENT_TOKEN_TO_BE_REPLACED

Jabra PanaCast Review - Get Your Huddle On
END_OF_DOCUMENT_TOKEN_TO_BE_REPLACED