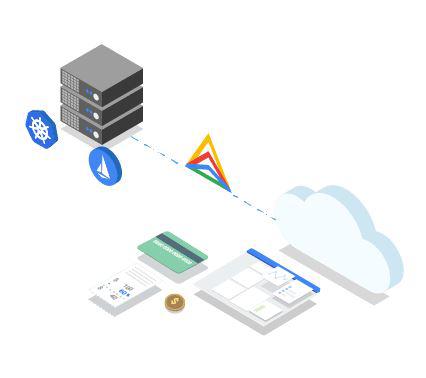 Named Anthos, the new offering is designed to make embracing hybrid cloud computing easier by enabling organizations to run containerized applications without modification both on premises and in the public cloud. By Rich Freeman
Tweet

Google has launched a new platform aimed at helping organizations embrace hybrid cloud computing more easily by enabling them to run containerized applications without modification both on premises and in the public cloud.

Named Google Anthos and based on the Cloud Services Platform Google announced last year, the new offering debuted today at the Google Cloud Next ’19 conference in San Francisco.

Significantly, users can manage Anthos workloads on public clouds from providers other than Google, including Amazon Web Services and Microsoft, as well.

“Anthos will also let you manage workloads running on third-party clouds like AWS and Azure, giving you the freedom to deploy, run and manage your applications on the cloud of your choice, without requiring administrators and developers to learn different environments and APIs,” said Urs Hölzle, senior vice president for technical infrastructure at Google, and Eyal Manor, vice president of engineering for Google Cloud, in a joint blog post.

“Throughout it all, Anthos is a 100% software-based solution. You can quickly get up and running on your existing hardware—with no forced stack refresh. Anthos leverages open APIs, giving you the freedom to modernize any place, any time and at your own pace,” they continued.

According to Google, hardware, software, and services for Anthos are available immediately from more than 30 vendors and system integrators. Those include the seven open source data management and analytics providers Google announced strategic alliances with today, plus Hewlett Packard Enterprise, which introduced reference architectures for Anthos featuring products from its SimpliVity, Nimble Storage, and ProLiant server lines today.

With the launch of Anthos, Google becomes the last of the top-three hyperscale public cloud operators with a complete hybrid cloud offering. Microsoft’s Azure public cloud has been compatible with its on-premises Windows Server operating system from the beginning, and the Azure Stack solution it’s been shipping since 2017 with help from partners like Rackspace and Dell EMC is designed to further augment hybrid cloud flexibility.

Amazon Web Services has been offering hybrid cloud services in collaboration with VMware for over 18 months, and more recently introduced an Azure Stack-like product named Outposts.