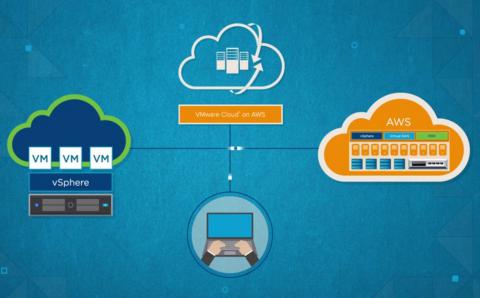 The new offering, which enables customers to run VMware’s software-defined data center stack both on premises and on Amazon’s public cloud, turns both vendors into instant players in the hybrid cloud marketplace. By ChannelPro
Tweet

VMware Cloud on AWS is delivered, sold, and supported by VMware as an on-demand, elastically-scalable cloud service designed to remove barriers to cloud migration and cloud portability, enhance IT efficiency, and create new opportunities for customers to leverage a hybrid cloud environment.

“VMware and AWS are empowering enterprise IT and operations teams to add value to their businesses through the combination of VMware enterprise capabilities and the breadth and depth of capabilities and scale of the AWS Cloud, providing them a platform for any application,” said VMware CEO Pat Gelsinger in a press statement. “VMware Cloud on AWS gives customers a seamlessly integrated hybrid cloud that delivers the same architecture, capabilities, and operational experience across both their vSphere-based on-premises environment and AWS.”

VMware Cloud on AWS runs on VMware’s Cloud Foundation software-defined data center platform, which incorporates its vSphere, vSAN, and NSX virtualization technologies. Key features include bi-directional workload portability between private and public clouds, the ability to scale host capacity up or down in minutes and launch an entire VMware software-defined datacenter in less than two hours, and support for containerized workloads and DevOps services such as Pivotal Cloud Foundry.

Furthermore, integration with VMware’s vCenter management solution enables technicians to administer private and public cloud applications with familiar tools and without having to purchase new or customized hardware, rewrite code, or modify their operating model.

AWS will initially support the new service in its US West (Oregon) region and roll it out to additional regions worldwide in 2018.

At present, users pay on an hourly basis when hosts are active in their account. VMware plans to make one- and three-year subscription options available as well later. VMware’s Hybrid Loyalty Program will also offer discounts to customers with on-premises VMware vSphere, NSX, or vSAN licenses.