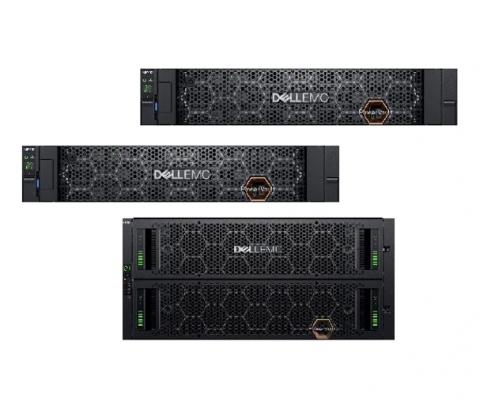 The PowerVault ME5 offers twice as much performance and capacity as its predecessor, and over 70% more throughput. By Rich Freeman
Tweet

Dell Technologies has shipped a new edition of its entry-level workhorse storage array for SMBs.

A successor to the PowerVault ME4, which reached market late in 2018, the new PowerVault ME5 offers significantly more power and capacity, according to Dell Product Marketing Manager Joe Catalanotti.

“It’s not an upgrade,” he says. “We’re looking at this as a complete hardware refresh.”

All three arrays are powered by Intel Xeon processors with four cores, versus the dual-core chips used in ME4 systems, resulting in a 2x improvement in performance, from 320,000 IOPS in earlier units to 640,000 in the new ones.

The ME5’s dual-active controller architecture, which provides 16GB of memory per controller, supports 12GB per second read and 10GB per second write throughput.

“You’re going to see a 70% increase in write throughput and customers will probably see anywhere from an 80 to 82 percent read increase,” Catalanotti says.

Users in need of faster performance for some data can run PowerVault ME5s alongside pricier models with flash and NVMe technology from Dell’s PowerStore and PowerMax lines in multi-tiered architectures.

At launch, the ME5 accommodates up to 6PB of storage, 50% more than the ME4. When new high-capacity drives become available later this year, maximum capacity will rise to 8PB without an upgrade.

“All the firmware has been designed to immediately accept and support 8PB,” Catalanotti notes.

Supported storage media include a variety of SSD, 10K, and NL-SAS drives. A revamped management interface with added monitoring features is designed to make administering the system simpler for technicians. “We essentially changed the user experience and made it a lot easier to work with,” Catalanotti says.

Optimized for SAN, DAS, and select edge computing workloads, the PowerVault ME5 can also host up to 500 virtual desktops and support high-performance computing applications as well.

“This product is very versatile in terms of the workload spectrum that it can apply to,” Catalanotti says.

The new devices are validated for use with Dell’s 14G and 15G PowerEdge servers, and will be compatible with the forthcoming 16G family when that product family ships. “There won’t be any necessity to do any upgrades or change firmware or anything like that,” Catalanotti says. “It’s just going to be plug and play.”

Like its predecessor, the new ME5 is designed to provide simplicity, speed, and affordability. Pricing begins at $12,000 for base configurations.

“The TCO is relatively low,” Catalanotti says. “It’s simple to use, so you’re saving on OPEX too.”

In the nearly three and a half years since the PowerVault ME4 shipped, Dell has sold over 54,300 units to some 26,500 customers. Many of those businesses are now candidates for ME5 refresh deployments. Those sales are eligible for the recently announced 2% incremental rebate on deals associated with Dell’s “tech refresh” sales program, which seeks to drive new infrastructure deployments in companies with aging equipment.