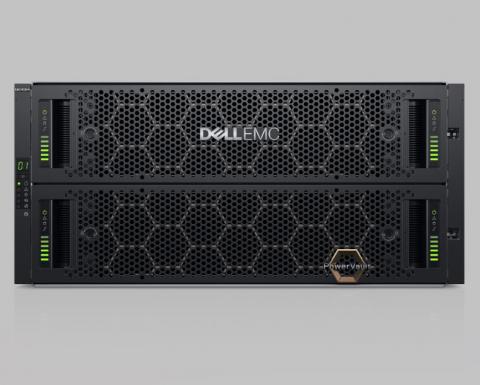 The new PowerVault ME4 family offers four times the read performance and 122 percent as much capacity as the PowerVault MD3 products it replaces at roughly the same price. By Rich Freeman
Tweet

The Dell EMC unit of Round Rock, Texas-based Dell Technologies has launched a new set of flagship entry-level storage arrays for SMBs.

Available now, the PowerVault ME4 series offers four times the read performance and 122 percent as much raw storage capacity as the PowerVault MD3 family it replaces. Minimum configurations list for under $13,000.

“The economics are compelling,” says Sean Kinney, senior director of product marketing for Dell EMC. “This product is now four times as fast for about the same price.”

Designed for use in direct-attached storage scenarios and with smaller storage-area networks, PowerVault ME4 units deliver up to 320,000 IOPS and up to 4 PB of capacity. They distribute that storage space across as few as 12 and as many as 84 solid-state and hard-disk drives that users can mix and match in any desired combination. “It can be 100 percent flash, zero percent flash, all spinning disk, or any combination that you want,” Kinney says.

Dell EMC has engineered the new product line for maximum simplicity, he continues. All PowerVault ME4 arrays integrate out of the box with Dell EMC PowerEdge 13th and 14th Generation servers and come with a web-based HTML 5 management interface optimized for ease of use.

“Really there’s nothing to learn,” Kinney says, adding that even inexperienced users can install the new systems in 15 minutes and configure them in 15 more. Free best practice and configuration guides for applications such as Microsoft SQL Server, Exchange Server, and Hyper-V, plus VMware vSphere, are designed to further simplify implementation for channel pros.

“We’ve actually done all the testing and guidance for them,” Kinney says. “They just have to follow the recipe.”

PowerVault ME4 products are simple to sell as well, according to Kinney, whjo notes that they come with an extensive software package offering data protection, thin provisioning, remote replication, snapshotting, drive-level encryption, and volume cloning, among other functions, as well as integration with VMware’s vCenter and Site Recovery Manager solutions.

“You don’t have to manage software licenses,” Kinney notes. “It’s all in the box in one package.”

Also included in the software bundle is Distributed RAID support and three-level tiering functionality that dynamically decides whether to store data on high-performance or high-capacity drives based on real-time I/O readings.

All three units come with two hot-swappable controllers, each of which is powered by a dual-core Intel Broadwell processor and equipped with 8 GB of memory. Supported host interface protocols include iSCSI, SAS, and Fibre Channel.

The PowerVault ME4 family’s debut is the second step in an ongoing strategic realignment of Dell EMC’s storage portfolio that began in May with the launch of the high-end PowerMax line.

“Our goal is to simplify the portfolio and have one main offering for each market segment that leads in innovation,” Kinney says.

Other recent product-related headlines from Dell EMC include the unveiling of new composable infrastructure and Internet of Things solutions in August, and the introduction of the company’s first hyperconverged infrastructure appliance for Microsoft’s Azure Stack private cloud platform bearing all-flash storage in July.