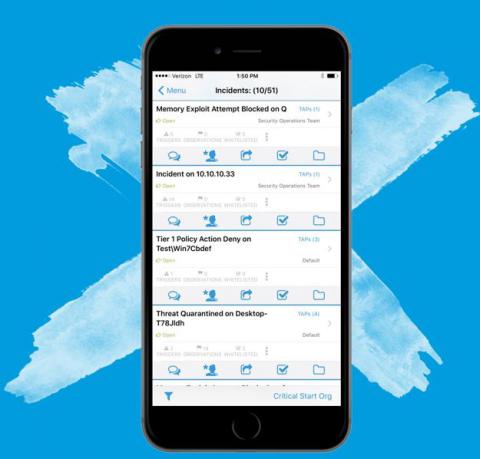 Whether serious or not, all events appear in a ledger that customers can view at any time. “We’re providing full transparency,” Myers says. “Our customers can see exactly what logic was applied to every single alert that comes in.” At the conclusion of the assessment and response process, analysts create a new runbook to automate future appearances of the threat.

According to Myers, the emphasis on automation in CRITICALSTART’s methodology allows the company to do work that might occupy 100 analysts at other vendors with just 20 instead, and charge less as well. “We’re actually less expensive because we have less operational overhead,” he says.

CRITICALSTART’s end user customers range in size from Fortune 500 businesses to companies with around 75 employees. Most of those organizations have at least some in-house security professionals on staff.

To further accelerate channel-building efforts, Myers recently hired regional channel managers for the eastern, central, and western U.S. Identifying promising recruitment candidates in consultation with key vendors will be among their early priorities. “We’re going to be working with them to identify key partners in those geographies for those manufacturers that they already have good relationships with,” Myers says.

At present, he continues, CRITICALSTART has seven partners in all. Talks are underway with another 15 to 20, and the company hopes to have roughly 50 resellers, ranging in size from national brands to regional players to smaller companies, by this time next year.

Outsourced services for channel pros without security expertise are steadily proliferating. SolarWinds MSP, for example, introduced threat monitoring services in collaboration with third-party specialists a little over a year ago, which was roughly three months after Continuum formally launched a SOC service of its own. Acronis, for its part, announced multiple outsourced services in August and Sophos launched a managed threat response service last week.