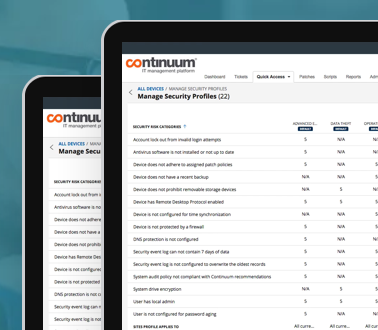 The deal adds SIEM, endpoint, and web gateway solutions from one of youngest yet most popular security specialists in the SMB channel to Continuum’s family of security solutions. By Rich Freeman
Tweet

In a significant expansion of its strategic entry into the solution market, managed services software and outsourcing vendor Continuum has acquired CARVIR, a provider of security solutions for MSPs.

“Security is the greatest threat to businesses today, and greatest opportunity for MSPs, and Continuum Security was created to enable the channel to capitalize on these dynamics.” said Continuum CEO Michael George in a press statement. “Our partners already benefit from our security solutions and it was clear to us that, by bringing onboard CARVIR’s expertise and technology, we could heighten our partners’ capabilities in this space. In doing so, we’ve been able to rapidly accelerate our own plans to enhance Continuum Security, and are now in pole position to fuel our partners’ growth and profitability in cybersecurity and beyond.”

Continuum signaled an impending entry into security services as far back as October 2016. A year later, at the 2017 edition of its Navigate partner event, the company officially unveiled a security solution set with two core components called Profile & Protect and Detect & Respond, both of which are backed by 24/7 security operations centers in Pune and Mumbai, India.

In a short time, CARVIR has established itself as one of the most popular security vendors in the SMB channel. Since November 2016, when its endpoint security product first went on sale, the company has accumulated over 500 MSP partners who support more than 4,000 client sites.

Continuum was acquired by Chicago-based private equity firm Thoma Bravo a year ago, and has been eyeing potential acquisition targets ever since. Purchasing CARVIR is its most significant such transaction to date in the security space.

Security is Continuum’s top priority at present and big bet for the future.