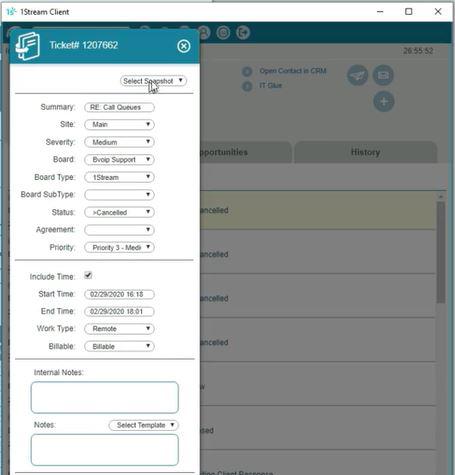 The recently introduced enhancements provide more control over what data the unified communications integration platform exchanges with ConnectWise Manage and Autotask PSA, and provides greater visibility into unanswered calls, among other topics. By Rich Freeman
Tweet

BVoIP has rolled out a fresh wave of enhancements to 1Stream, its unified communications integration platform.

The new features, which have reached market on a staggered schedule in recent weeks, give users more granular control over the data they exchange with popular PSA solutions and new reporting options.

MSPs that rely on ConnectWise Manage, for example, can now give 1Stream users access to the same functionality regardless of whether they’re classified in the PSA system as full-time employees or subcontractors.

Users of Datto’s Autotask PSA solution, meanwhile, can now draw on a wider selection of fields from that product when creating tickets in 1Stream. Specific fields now supported include Work Type, which identifies the type of service the MSP is providing; User Role, which shows whether the person filing the ticket is a technician or manager, for example; and Ticket Due Date. Users can also now specify both a Ticket Type and Ticket Category, two different classification options in Autotask.

Another new feature lets MSPs create a uniform set of default fields on new ticket forms for multiple PSA, CRM, ERP, and other third-party tools. “We didn’t have an easy way to unify that across all the platforms,” Bardissi observes. “Now we allow them to actually go into 1Stream and set the default there.”

Reporting updates include the addition of icons to the client interface and manager’s dashboard that let users see all tickets or other activities connected to a call with just one click.

A new unanswered calls report, meanwhile, helps companies drill into data about an issue with significant implications for customer satisfaction. “People don’t want to have to be calling you over and over again,” Bardissi observes. Now, he continues, channel pros can see not only how many unanswered calls they get but also when those calls tend to arrive, which employees are most often associated with them, and whether they’re more apt to be related to sales, support, or another topic.

The latest set of 1Stream upgrades follows two earlier batches released in January. Users can expect similar changes to continue arriving steadily. “This is the year of updates,” said Bardissi in an earlier conversation with ChannelPro. “You’re going to just see constant movement on our side.”

Additional integrations with widely used applications not currently supported by 1Stream will be part of that movement, according to Bardissi, who declined to name specific examples.

BVoIP shipped version 2.0 of 1Stream, which added new Windows and Mac clients and a feature that automatically pops multiple windows connected to multiple external applications when users answer a call, last October during the ConnectWise IT Nation Connect conference.

The Year Ahead in Processors
Tech Together: How AI, Blockchain, Drones and IoT Can Safeguard the Supply Chain
END_OF_DOCUMENT_TOKEN_TO_BE_REPLACED

Jabra PanaCast Review - Get Your Huddle On
END_OF_DOCUMENT_TOKEN_TO_BE_REPLACED