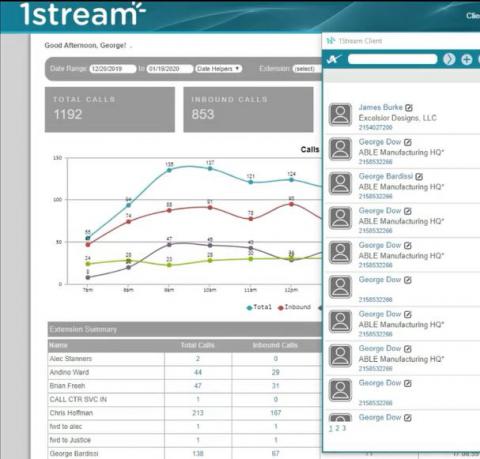 A string of updates introduced by the unified communications vendor in recent days lets users store and access more detailed information, and provides greater flexibility in how technicians access that information. By Rich Freeman
Tweet

Unified communications vendor BVoIP has rolled out a fresh wave of enhancements to its 1Stream integration platform. Introduced gradually beginning last week, the updates collectively seek to let users store and access more detailed information and then report on that information more flexibly.

A change affecting users of the ConnectWise Manage PSA system, for example, lets technicians assign a specific location to tickets, contacts, and other records involving a customer with multiple offices. The goal is to help users find and segment information about larger clients more easily, according to BVoIP CEO George Bardissi.

“It just gives a little bit more granularity,” he says.

The same, he adds, is true of a newly released 1Stream feature for users of Datto’s Autotask PSA product that lets partners track whether service incidents were reported by phone, email, their web portal, or another source. Channel pros can employ that data to assess how clients prefer to communicate with them, according to Bardissi. Source options presented in 1Stream are imported directly from the corresponding list in the user’s Autotask deployment.

Another update enables users to link a received call with a specific record in a third-party ticketing system without exiting its interface. “You can match a call against the CRM record or PSA record without having to edit that record within the 1Stream app,” Bardissi says.

Several new reporting features in 1Stream seek to help BVoIP partners examine usage patterns in greater detail. The system’s dashboard, for example, now provides one-click access from the top of the screen to company-wide lists of inbound calls, outbound calls, and unanswered calls, as well as an aggregated list of all calls. That functionality supplements previously available drill-down reporting on individual users.

A new set of customer call reports available exclusively in the Enterprise edition of 1Stream displays information about support calls from specific customers, including the total number of calls, how many were answered, average speed of response, and average length of call. Users can actually listen to any of those calls as well.

“When they click on a call recording from the report, it takes them back to the 1Stream portal and it plays them just that call,” Bardissi says.

Partners can limit the report to a specific set of phone numbers associated with a particular client, or to an inbound support line dedicated to that client. According to Bardissi, partners can utilize the data to see how much overhead they invest in each of the companies they serve or to show those companies how much support they’re receiving for the money they pay each month.

“It really takes the level of information you’re sending your customer a lot deeper,” says Bardissi, noting that users can configure 1Stream to send a copy of the report to customers automatically at scheduled intervals.

Other changes are designed to improve the system’s usability and security. A new wizard-driven process for adding users, for example, allows partners to setup accounts automatically for one person or a list of them based on data in their PSA, ERP, or CRM system. That feature augments self-serve user administration functionality introduced late last year in connection with the release of 1Stream 2.0.