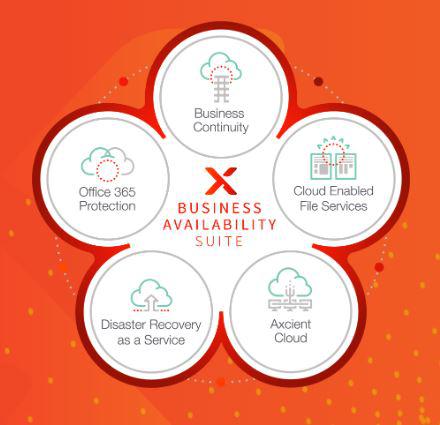 Named X360, the new unified entry point for all of Axcient’s products is part of a larger campaign to make buying and delivering business availability solutions simpler for MSPs. By Rich Freeman
Tweet

Axcient has converged its suite of business availability solutions for MSPs into an integrated platform named X360.

The new offering provides unified, single sign-on access to the vendor’s Office 365 backup, file sync and share, and business continuity/disaster recovery products, plus an associated set of billing, marketing, and enablement resources, through a single, intuitive interface for the first time.

“It really allows you to bring a multilateral backup approach for different product sets, but make it really easy,” says Axcient CEO David Bennett. “It’s one unified look and feel. We’re the only platform that’s done that purely for the MSP.”

Pulling everything together within a single console was no simple accomplishment either, adds Angus Robertson, the vendor’s chief revenue officer. “It’s easier said than done, because we had to bring together a fair amount of technology, but at the end of the day delivering that one user experience is everything for MSP productivity and being able to manage those three backup services,” he says.

The introduction of X360, which Axcient unveiled this week at managed service software vendor ConnectWise’s IT Nation Connect event in Orlando, marks the culmination of a long process that began in earnest early this year, when Bennett, who was previously CRO at security vendor Webroot, stepped into his present role. A listening tour with MSPs quickly convinced him that there were two big problems with most business availability solutions, beginning with the complex range of interfaces they required users to master for protecting Microsoft data, backing up local data, and managing file sync and share tools.

“You ended up having an MSP that had three people managing backups disparately across their organization,” Bennett says. “The whole launch of the [X360] platform predominantly, first of all, simplifies how do I use backup technology and make it easy for my business.”

Bennett and his team have also made simplifying fee structures for Axcient solutions a priority this year. That too was inspired by Bennett’s conversations with MSPs.

“Technology vendors make it hard for people to understand the price they pay for technology,” he says. That, in turn, makes pricing business availability solutions for customers equally hard.

“A lot of these MSPs would have a CFO that would spend three or four hours a month trying to reconcile a bill from their backup provider and then try to work out what are they going to charge their end user,” Bennett recalls.

Axcient has eliminated that problem, he continues, by winnowing down what used to be nearly 1,500 SKUs with variables for number of endpoints, length of contract, amount of data, and duration of retention down to just 11, all of which feature pay-as-you-go rates.

“There’s no minimum commit now, so you don’t have to commit to buying two or three years of technology,” Bennett says.

Since August, moreover, all of Axcient’s solutions have come with unlimited storage and retention in the Axcient Cloud. “It’s super easy. It’s per user, fixed price, and that’s it,” Bennett says. “It doesn’t matter who their end user is. It doesn’t matter how long have they got to keep their information. It’s really simplified a lot of their pain.”

The Road to Success Is Paved with Service
END_OF_DOCUMENT_TOKEN_TO_BE_REPLACED

Jabra PanaCast Review - Get Your Huddle On
END_OF_DOCUMENT_TOKEN_TO_BE_REPLACED