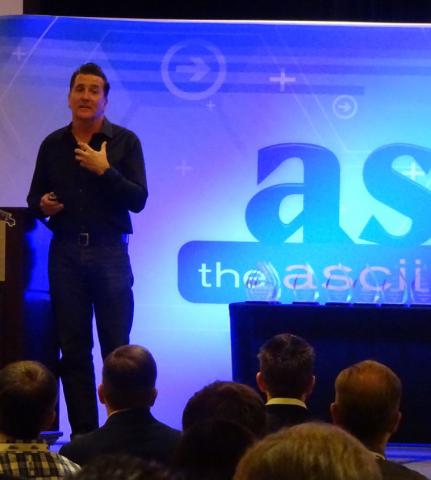 Speakers and sponsors at the conference, which took place last week in Orange County, Calif., shared advice for capitalizing on rising demand for cybersecurity help and industry-specific services. By Rich Freeman
Tweet

Held at the beginning of the Bethesda, Md.-based partner community’s 35th anniversary year, the conference included presentations by both channel pros and vendors on the ever-multiplying vulnerabilities faced today by businesses large and small, and the ever-expanding range of solutions for mitigating those risks.

“It’s an important topic, obviously,” says ASCII Group President Jerry Koutavas, noting that it’s an important opportunity for IT providers as well. Indeed, global outlays on security-related hardware, software, and services will climb at a 9.9 percent CAGR through 2022 to $133.7 billion, according to IDC.

SMBs will account for significant hunk of that spending, Koutavas notes, driven in part by increased access to more powerful solutions. “Technologies that were typically only geared toward the enterprise are now coming down market, and if you’re a small business you can effectively afford to have stronger protection for your business,” he says.

Speakers at the conference included ASCII member Robert Boles, president of BLOKWORX Inc., a managed security service provider in Reno, Nev. “He’s made a successful transition to become an MSSP,” Koutavas says. “I believe that a lot of MSPs feel that they may be there and truly are not there, because there’s a lot of work involved in making that transition.”

Boles shared some of the lessons he’s learned on his path to becoming a security specialist, including the importance of developing a thorough incident response plan. “Be proactive,” he said, adding that the time to find out you’re unprepared to remediate successful security breaches isn’t after one occurs. Boles also urged his peers to embrace defense-in-depth threat prevention strategies.

“There’s no silver bullet,” he said of today’s security solutions.

Sponsors at the conference showcased some of the newest such solutions in the event’s expo hall. Calyptix, Comodo, Duo (a Cisco subsidiary since last year), ID Agent, Mailprotector, Passportal, RocketCyber, Sophos, and Webroot (soon to be a unit of Carbonite) were among them.

Speakers at last week’s show discussed more than just security. Angel Rojas, CEO of DataCorps Technology Solutions Inc., a provider of cloud and managed IT services in Brandon, Fla., discussed best practices for developing a service practice tailored to the needs of plumbers, electricians, and other end users in the home services market.

“Managed services have been around for a while,” he observed. “A lot of what we do is commoditized.” Specializing in a seemingly obscure vertical like home services can help channel pros differentiate themselves and collect higher margins. Be patient though, he counseled. Cultivating industry expertise takes time.

ICYMI: Our Channel News Roundup for the Week of January 23rd, 2023
END_OF_DOCUMENT_TOKEN_TO_BE_REPLACED