Jabra PanaCast Review - Get Your Huddle On: Page 2 of 3 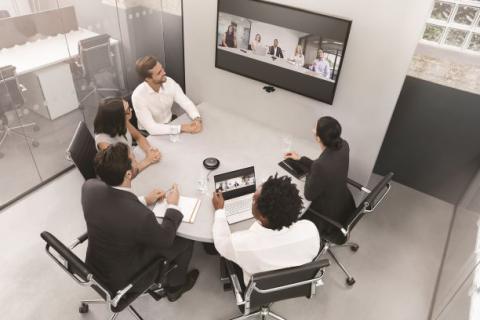 Out of the box, the PanaCast’s flexible mount allows it to be attached to a laptop display or monitor like any other traditional webcam. There is also a threaded hole for a variety of other mounting options like table stands, tripods, and wall mounts.

The PanaCast itself sports a single USB-C connector rather than a hard-wired cable like most webcams (this is expected, since it is designed to be part of the stationary AV equipment in a room). Those using it on the go will need to bring along the included 3-foot USB-C to USB-A cable.

PanaCast is compatible with both PCs and Macs and certified for use with a wide range of conferencing applications; my testing was on a PC and notebook running Windows 10 using Zoom, Skype for Business, and Teams.

First and foremost, PanaCast is a plug-and-play device. All the video stitching for the three cameras is done on the device itself, so anyone with a notebook can simply attach it and start using it with no additional software required. There is a recommended software component, Jabra Direct, that can be optionally downloaded. Jabra Direct is how you get firmware updates, and most importantly, it exposes a bunch of settings to adjust or fine-tune the video.

Jabra describes PanaCast as an “intelligent” cam, with the ability to locate and adjust both the electronic zoom and view according to those present. When I sat in front of it alone, it started in a wide, panoramic view, but ultimately decreased the view to 120 degrees, zoomed in, and centered on just my face.

While the intelligent zoom generally works well, it takes a good 20 to 30 seconds to figure out the best mode to use. It was very good at detecting and settling on a view with a larger group of subjects sitting around a table. With fewer participants (especially with just one or two people in view) I found it indecisive. It locked in on a view and zoom level for a few minutes, then adjusted to another one, and kept switching back and forth. Those who wiggle around or lean in and out, particularly in close quarters to the camera, will find it constantly trying to adapt.

At full resolution with suitable lighting, the video quality is above average. Colors aren’t oversaturated, and the image is sharp and clear. While the intelligence feature optimizes the scene view, it does so at the expense of quality—zooming in made the image look muddled and noisy. When using it more as a webcam or with few people, I recommend positioning the camera as close as possible. 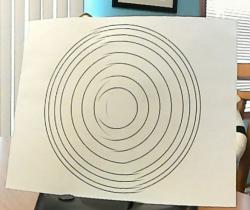 Image stitching between cameras is good, but not perfect. There are two different video modes selectable in the Jabra Direct software, Blend and Carve, which differ in how they blend the images together. Carve mode did a better job making the seam less noticeable in the overlap region. The seam is more noticeable at close range but is still visible if a subject happens to be in just the right spot.

Video controls for things like color, contrast, white balance, zoom, etc., are available to tweak (and thanks to a recent update, will save between sessions), and are adjustable in real time. The device settings are in a separate section and require a reboot of the camera if changed. That would be annoying, but few will want to change these from the defaults. The exception may be the intelligent zoom feature, which may be desirable to disable in certain integrations.

The PanaCast has two built-in microphones for audio pickup, which worked about as well as expected for integrated microphones. As a webcam, I’d say it’s better than average, but meeting space integrators will want to eschew the built-ins for a dedicated audio device.

Jabra PanaCast Review - Get Your Huddle On
April 6th, 2020