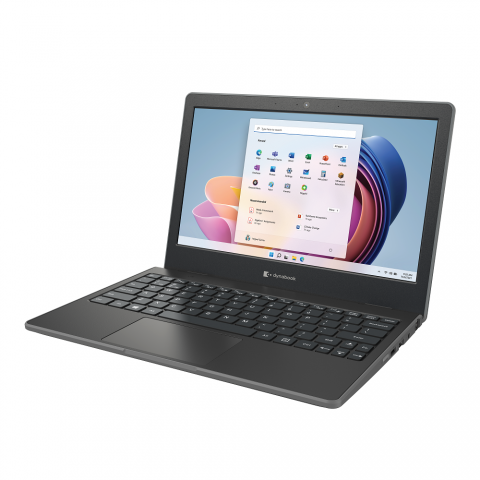 Featuring Windows 11 SE, designed for K-8 students, the Dynabook E10-S gets a good report card for being rugged and responsive. By James E. Gaskin
Tweet

The operating system is Windows 11 for Education. This is Microsoft's counter to Chrome OS as far as we can tell, and it does a pretty good job once you get used to it.

Setup is a little odd for a single machine like this, but it’s designed for Windows Intune for Education to control. Interesting that it offers about a hundred foreign keyboard layouts as a second keyboard, so this laptop should export well. The 802.ac Wi-Fi pulled in faint networks and performed speedily and reliably. 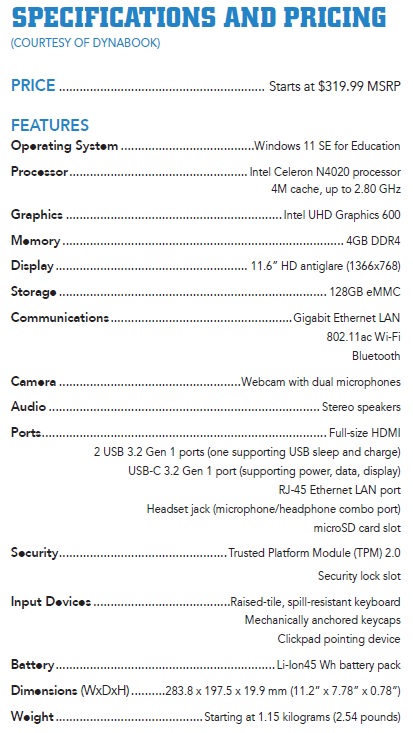 Once connected, however, interesting things happen. Just as Google's Chrome relies on Google back-end services, Windows 11 SE relies on Microsoft OneDrive. If students have school-assigned and managed IDs, this will work like the Google version. However, when we put in a personal ID to get started, it pulled information from other computers and stuffed it all into this one. Beware of that during setup. Files go to the cloud first, and some come back for local, off-line access.

The default look is the dark Windows 11 theme, pared down to Edge and Microsoft Teams. The 1366x768 screen is sharp with excellent contrast, and better than we expected at this price point. The Intel Celeron N4020 processor runs at 1.10 GHz, and with the 4GB RAM and 128GB SSD, feels as snappy as any education Chromebook. If Dynabook decides to add Chrome OS to this box, it will compete well in the market.

Although Candy Crush and other bloatware apps Windows always includes are missing, the full Microsoft 365 suite is available, awaiting your subscription. Minecraft: Education Edition was an app we wanted to try, but alas, it never stopped upgrading, so Microsoft and Dynabook need to address that issue.

Since no one knows better the perils of the classroom than teachers, we asked a couple to test this laptop for a while. It impressed both with the keyboard, the ruggedness, and the performance. That's important because teachers often get a student laptop for their classroom computer. You must use Intune to load applications on this unit, meaning we couldn't install the Chrome browser, but the Edge browser supported Google Classroom without a hiccup. That means it can replace any existing school laptops or Chromebooks in Google-oriented schools right out of the box.

Student systems, for in-school and home use, have become an enormous market. The Dynabook E10-S gets a good report card for being rugged and responsive, with better-than-expected input devices like the keyboard and Clickpad. Whether Microsoft Windows 11 SE makes headway in the education market should be separate from how well this Dynabook performs in a (sometimes hostile) school environment.