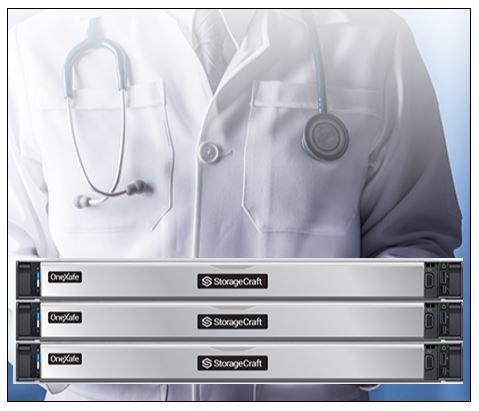 The new system, which is available immediately, is the Draper, Utah-based vendor’s third industry-specific offering, following a solution for law enforcement agencies and another for educators introduced last year. Unlike those earlier systems, StorageCraft for Healthcare is based on OneXafe, the scale-out converged storage and protection platform that first reached market last August.

The new system is designed to help midsize healthcare organizations such as regional and community hospitals more efficiently manage exploding volumes of electronic patient records, medical imagery, and other digitized information. Globally, such data will grow at a 36 percent CAGR through 2025, according to a recent report from IDC sponsored by Seagate Technology.

“The amount of data is growing exponentially,” observes Shridar Subramanian, StorageCraft’s vice president of marketing and product management, who adds that the financial challenges of simply housing all that data are compounded by the erratic rate at which it accumulates.

“They don’t know what kind of patients are going to come in over a period of the next six months, what kind of tests are going to be ordered, what kind of data is going to be generated,” he notes. As a result, healthcare providers often buy more storage than they need upfront to ensure sufficient capacity for future requirements. StorageCraft for Healthcare’s scale-out architecture mitigates that problem by allowing users to deploy only as much storage as they need now and add more later as requirements dictate.

“As their needs grow, they can keep adding machines to it on the fly without changing any of the applications or without any of the doctors having to worry about it,” says Subramanian. Unlike solutions from enterprise storage vendors that sometimes set three- or five-node minimums for initial configurations, he adds, StorageCraft for Healthcare lets buyers start out with as little as one node.

The OneXafe platform’s “bring your own drives” policy enables further savings, according to StorageCraft, by allowing healthcare organizations to buy affordable hard-disk or solid-state drives from the supplier of their choice, and then capitalize on continually dropping storage costs as they incrementally add capacity over time.

Healthcare organizations are especially vulnerable to such attacks. In other verticals, Subrmanian notes, ransomware victims suffer operational disruption and financial losses. “In the healthcare segment it also impacts human life, in that there may be patients coming in and if the data is attacked by ransomware and you cannot get to the data, getting them timely access to the right treatments may also become difficult,” he says.

StorageCraft for Healthcare is also designed to preserve data integrity. Hospitals and other care providers typically retain medical data for long periods of time, during which corruption can occur. According to Subramanian, however, the new offering’s underlying OneXafe platform is equipped to detect and roll back “bit rot” automatically.