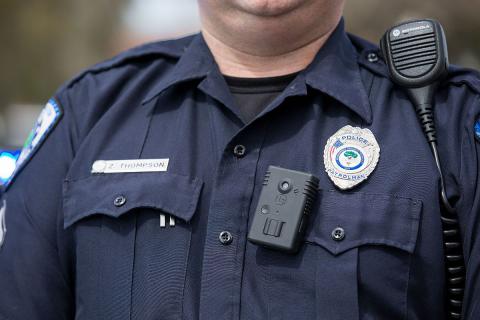 Partners, who must purchase and integrate those additional solution components separately, can add maintenance services to the package as well to collect recurring revenue on top of one-time acquisition and implementation fees.

“This will be a great opportunity for partners to get in with something that truly addresses a pain point in this market,” says Shridar Subramanian, vice president for marketing and product management at StorageCraft.

The core source of that pain is the costly burden of storing and managing the massive quantities of video that law enforcement agencies have been accumulating ever since they began equipping officers with body cams in an effort to collect a definitive record of citizen encounters. The resolution—and hence size—of that footage has increased steadily in recent years, Subramanian says, from 720p to 1080p to 4K. At the same time, he adds, changing retention policies are requiring governments to hold on to body cam video for longer periods.

“It used to be that you could retain the data for a couple of days,” Subramanian observes. “Now it’s becoming a few months to even several years in certain regions.”

Until now, he continues, law enforcers have had two options for warehousing all of that data. One is to purchase traditional storage hardware, in which case they must estimate their capacity requirements over the lifecycle of the solution in advance, pay for it all upfront, and deal with the disruption of a “forklift upgrade” if they underestimate their needs.

The other is to use either a public cloud from providers like Amazon Web Services and Microsoft or one of the specialty cloud services operated by body cam manufacturers. Despite the cloud’s reputation for cost effectiveness, Subramanian argues, neither alternative has proven to be inexpensive.

“The overall bill that they get in terms of the storage, the internet charges, [and] the retention requirements just becomes pretty big,” he says.

Buying traditional on-premises storage is costly as well, Subramanian continues. Indeed, based on estimates from industry experts, StorageCraft estimates that a body cam costing $500 to purchase produces an average of $500 a year in additional data storage and management costs.

“If you think about a department that has 50, 60,100, or even more officers, the numbers actually start growing quite dramatically,” Subramanian says. “They don’t have the budget allocated for that.”

StorageCraft for Law Enforcement is designed to offer police chiefs and county sheriffs a “very happy medium,” Subramanian says between their two earlier choices. Users can purchase an entry-level configuration with 96 TB of capacity for less than $17,000 and then add nodes incrementally as their data volumes mount on a pay-as-you-go basis.

How to Build or Scale an Integrated Telehealth Platform
September 18th, 2020

The Road to Success Is Paved with Service
END_OF_DOCUMENT_TOKEN_TO_BE_REPLACED

Jabra PanaCast Review - Get Your Huddle On
END_OF_DOCUMENT_TOKEN_TO_BE_REPLACED