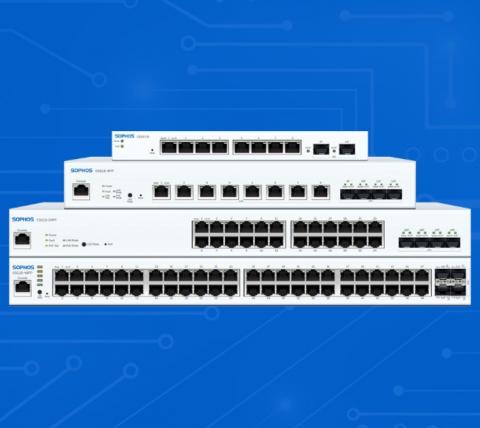 The new Sophos Switch Series is designed for use with the vendor’s previously introduced firewalls, access points, and SD-WAN appliances in remote work sites, branch offices, and retail outlets. By Rich Freeman
Tweet

Sophos has introduced its first-ever line of network switches.

“Sophos Switch seamlessly integrates with the Sophos adaptive cybersecurity ecosystem to extend connectivity across office LANs," said Joe Levy, chief technology officer at Sophos, in a media statement. “We’re removing the complexities of multi-vendor deployments by providing organizations and channel partners with a single source of management, monitoring, and troubleshooting.”

Sophos switches are available in two sub-families. The seven wall mount and rackmount models in the 100 Series come with 8, 24, or 48 1GbE ports plus either an SFP or SFP+ interface module. Four of the devices come with built-in Power over Ethernet technology with budgets ranging from 110W to 740W.

The three 200 Series models come with up to 32 1GbE ports and either eight or 16 2.5GbE ports, along with SFP+. At present, only one 200 Series unit, with eight 2.5GbE ports, no 1GbE ports, and a 240W PoE power budget, is shipping. The other two models are expected to reach market toward the middle of the year.

A zero-touch deployment process, the company says, automatically onboards units within minutes once an administrator keys in a device’s serial number.

The Sophos Switch Series is the latest addition to the vendor’s secure access portfolio, which includes firewalls, SD-WAN appliances, and access points, as well as the Sophos Wireless cloud-managed Wi-Fi security service.

Sophos introduced a new set of firewalls with an extra processor designed to accelerate inspection of encrypted traffic last April.

LG Gram for Business 17 (2020): Big Reasons to Like It
END_OF_DOCUMENT_TOKEN_TO_BE_REPLACED