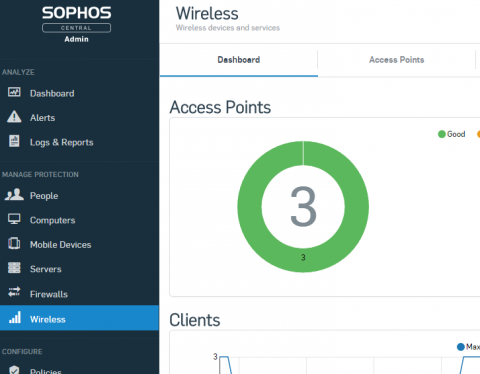 “It puts more control and power right at the fingertips of the partner, whereas historically they would have to have access into that local network and burrow into an on-premises wireless controller,” says Chris Kraft, vice president of product management for Sophos.

In most cases, Kraft continues, that controller would be a Sophos firewall. Enabling partners to safeguard Wi-Fi networks without a firewall reduces both the cost and complexity of wireless security deployments, and enables channel pros to compete for such projects more effectively.

“This centralizes and simplifies management and it removes the capex cost of a firewall in the environment,” observes Kraft, who adds that downplaying the role of onsite devices like firewalls in security solutions is one of Sophos’s long-term objectives.

“We want to reduce the required hardware on-premises and leverage the elastic cloud as best we can to deliver enterprise-grade security to our customers,” he says.

Rolled out in April, Sophos Central is an integrated management platform that enables technicians to administer multiple Sophos security products through a single interface. Together, Sophos Central and Sophos Wireless enable users to configure, view, and control all of their Sophos wireless access points in one place. The system also comes with a graphical network planning feature that integrates with Google Maps to help organizations optimize access point placement for maximum range and signal strength, as well as tools for collecting and analyzing network traffic reporting data.

Users pay for Sophos Wireless via an annual subscription fee. The complete price tag for a wireless security environment based on the new system, however, also includes the one-time cost of one or more Sophos access points.

According to Kraft, the release of Sophos Wireless, which comes one week after the introduction of a new “always-on” Sophos encryption solution, represents the latest step in the vendor’s ongoing effort to construct a comprehensive suite of security products.

“It’s part of our overall goal of delivering a complete security portfolio for our channel,” he says. “We want to provide all of the componentry, all of the services, that customers need in order to operate a secure business these days.”

Sophos also aims to coordinate the activities of its various solutions through the Heartbeat technology it introduced last year. At present, Sophos Wireless doesn’t include the kind of collaborative cross-solution capabilities that Heartbeat makes possible, but according to Kraft that’s set to change shortly.

“You can expect that you’ll start seeing those within our next release,” he says, citing as an example functionality that automatically keeps devices identified by Sophos Endpoint as untrustworthy off of wireless networks. Buying Sophos Wireless now positions companies to receive that and other upgrades, many of which will be free, as soon as they become available, Kraft notes.

LG Gram for Business 17 (2020): Big Reasons to Like It
END_OF_DOCUMENT_TOKEN_TO_BE_REPLACED