SMB Nation on the Road and Pivoting to the Cloud 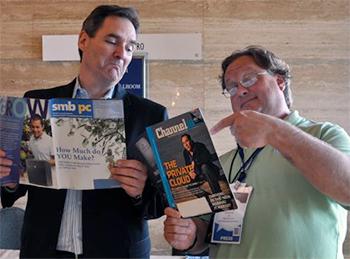 ChannelPro-SMB Publisher Michael Siggins and SMB Nation Founder Harry Brelsford talk about the future on the eve of the association's Toronto event. By Michael Siggins
Tweet

ChannelPro-SMB Publisher Michael Siggins recently caught up with SMB Nation Founder Harry Brelsford on the eve of their Toronto event.

Siggins: Harry, let’s talk about events. You’ve got several of them coming up and in some new places that we’re not always that familiar with. Can you give us an overview of the events coming up and the focus and who you’re hoping to see there?

Brelsford: Immediately coming up is our SNB Nation Spring Event (June 10 -11). That show became our traveler. So this year it’s in Toronto. Next year, same time, it’ll be in Sydney, Australia and then the following year in London. So spring is now our worldwide show, and then the fall show is coming up before we know it.

The fall show is in late September/early October in Las Vegas---September 30 through October 2nd, and that’ll be the ninth SMB Nation show, and I’ve got a couple of updates for you on that.

And, finally, we’re not too far off from our initial planning for the second MVP Nation in Seattle, in conjunction with the Microsoft MVP Summit. That event is planed for March 2012. So we’ve got three events queued up.

Siggins: So what else can we expect from SMB Nation over the next few months?

Brelsford: We’re working on a strategy to reboot our Pocket MBA program. Let’s call it Pocket 2.0. We’ve been in the game for about 18 months. We’ve had some lessons learned.

Michael, to be honest, not everybody in the SMB channel is what I would call MBA eligible, for whatever reason: their station in life, they’re too busy, or they’re just not interested. So we’re looking closely at our curriculum and dissecting it down into more bite-sized chunks--- I believe everybody should be educated and I want to help them get the training that they need. So in mid-to-late summer we’ll have a reboot of the MBA program.

And then our brand extension with Cloud Nation will be out about mid-summer. We have the domain and the trademark and all that, and so no one should be surprised that we want to participate in the cloud conversation.

But there’s a little bit of a cloud bubble going on right now, and we want to make sure we’re playing in the same sandbox. So that’s some of the things we’re doing, strategically.

Siggins: What are you hearing as sort of the biggest hot-button issues, as far as either challenges to channel pros or opportunities to them? Share some of your insights from being on the road so much.

Brelsford: I think there’s sizeable segment of our population that is concerned that they could be tomorrow’s travel agent, – so the way – what was it? Priceline, Orbitz, and Expedia fundamentally changed the travel agent’s role.

Quite frankly, I buy my tickets online a lot now. So I think our guys and gals are fearful that there’s a fundamental reset in the economy coming---a lot of their traditional offerings to SMB customers can be easily handled online by the customers themselves. So that’s the anxiety…let’s just take Intuit or SalesForce as examples. But some of the tools that are in the cloud – SalesForce is a great example can be leveraged by channel pros. Why couldn’t you a) use SalesForce, yourself or b) be a “SalesForce consultant” to small businesses?

Think about it: if you came into a small business such as mine, 10 employees, and you said, “Sir, I will, over the next three months, get you up and running on Sales Force.” It will make a real difference. So everyone’s starting to realize that the work will be fundamentally different, and some are embracing it, and some are resisting it.

The key word is we all have to become consultants, and you still see it. I tell you I still go to the user group meetings when I have the time, and, when you go, there’s still that old school crowd that they just love Small Business Server, and they want to play with the bits, and they want to tinker, and I’m worried about those guys. Not all of them are going to be able to make the adjustment.

Siggins: If you could offer up your summertime pearl of wisdom, what would it be, your parting advice?

Brelsford: I’d use the summer to start arming yourself, to really embrace cloud.

Office 365 is going to be huge when that thing hits, so I would get in the beta program on the technical side and then just start learning the new lingo of cloud on the sales side.

Don’t lead with price. I think where people are going to make a mistake with cloud – you’re going to come in and say, “Mr. Customer, we’re going to save all this money with cloud,” and, you know what? I think that’s how the telecom industry got in a tough way with VOIP.

You should lead with, “Cloud is handsome and attractive. It has all these features and functionalities, and, oh, by the way, we’ll probably save some money.” That’s my nugget.

ConnectWise Names Winners of Pitch IT Contest at IT Nation Explore 2019
June 16th, 2019