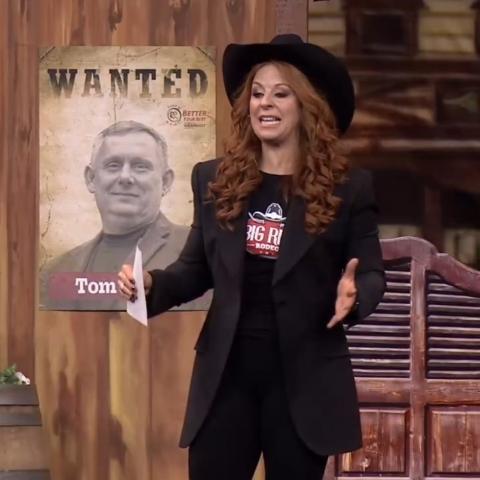 A reputation-building offering debuted at this year’s gathering of Technology Marketing Toolkit members and nonmembers, where speakers stressed business fundamentals for growing an MSP company along with the need to stand out in the market. By Colleen Frye
Tweet

Technology Marketing Toolkit (TMT) has rolled out a reputation-building service for its MSP members.

Robin Robins, TMT’s CEO, announced the new offering at the company’s 14th Annual IT Sales and Marketing Boot Camp, which took place May 11 – 14 in Orlando, and drew about 800 in-person attendees as well as upwards of 1,400 virtual attendees.

The one-year-long program, called “Celebrity-Authority-Trust,” is intended to help position MSPs as well-known, trusted authorities in a target market. It is open to a limited number of participants, starting at $27, 974, and comprises a Brand “You” Creation, which includes help crafting a unique origin story, professional photos, and updates to all existing marketing materials; online reviews and testimonial updates; a podcast interview; a special edition MSP Success Magazine featuring the member on the cover; a Done-for-You solo-authored book; a Done-for-You “shock and awe” box (both physical and digital), which includes a cover letter, overview of services and client bill of rights statement, copy of the book and the magazine, and more; 12 months of organic social media posting; and coaching from Robins.

Ross Brouse, president and COO of Continuous Networks, an MSP in East Rutherford, N.J., said he sees the value of such an investment. “She couldn't get the words out of her mouth before I said, ‘I want in, sign me up.’ And it's not cheap. … I'm okay with it because I understand what that's going to do for me long-term. I'm not expecting the results in three months or six months or nine months. I'm expecting the results in 24, 36 [months], or maybe even longer. You have to make those investments. If I just make teeny tiny little investments, it's not going to get me to where it is I want to go in that period of time.”

Robins also announced the winner of the annual Better Your Best Contest, in which members of TMT’s Producers Club (the highest membership tier) compete to be the company’s spokesperson of the year and win a car (an Aston Martin this year) based on how effectively they used marketing strategies over the past year to boost revenue and profits. This year’s winner was Mike Bazar, CEO of Bazar Solutions, an MSP based in Lubbock, Texas, who achieved an increase in revenue of $951,166, with profits up 208% and MRR up $33,000.

On opening night Tuesday, Robins stressed that even during challenging times, business fundamentals don’t change, something that Bazar says was key to his success. “We just didn't change anything. … We did cut back on sending letters to offices in March and April because nobody was there, but we never stopped our Google ads. We never stopped any of our email campaigns. We never stopped our newsletters.” He also added work-from-home advice to his website, he says, and reached out to customers about adding VoIP service.

In an interview with ChannelPro prior to Boot Camp, Robins said the most successful MSPs in the last year doubled down on sales and marketing, something she and Lemonis stressed at last year’s event, which like many conferences had to quickly pivot to virtual because of the pandemic. That is in line with what Paul Dippell, founder of Service Leadership, found in his benchmark data as well.

Neal Juern, president of Juern Technology, an MSP in San Antonio and a Better Your Best finalist, took that advice to heart, adding digital marketing to his activities by creating listings on Clutch and UpCity, websites that help companies find B2B providers. “We figured out if we just go create listings on both of those for free, and then have our customers give us real reviews on there, we would be one of the top results on those two sites. And then that would boost our ranking on Google some as well. We closed five new clients after doing that; that was our biggest performer in 2020.”

Also on opening night, Robins introduced the theme that ran through her presentations—that MSPs can effectively differentiate from the competition with a “trifecta of celebrity, authority, and trust,” adding that this becomes more important for businesses like MSPs that sell complicated services. “Stop selling ‘stuff’ and start selling you,” she advised.

“My mentor, Dan Kennedy, said the higher up the income ladder you go, the more you get paid for who you are than what you do,” she added. “Celebrity, authority, and trust work like a three-legged stool. So the more well-known you are, the more people tend to trust you.”

ChannelPro Weekly Podcast: Episode #235 - Greetings from the New Hampshire Chamber of Commerce
8 Best Hacking Training Courses to Boost your IT Career
10 Things You May Have Missed at ChannelCon 2022
END_OF_DOCUMENT_TOKEN_TO_BE_REPLACED