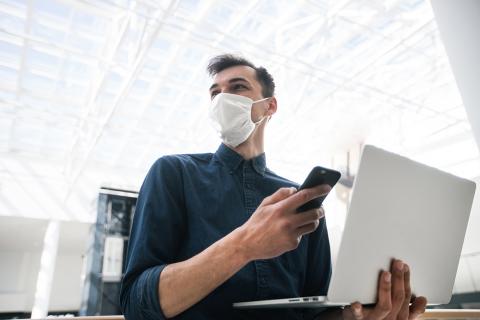 Learn what separates channel pros who were ready for the challenges of the pandemic and are now thriving in the new normal. By Colleen Frye
Tweet
Reader ROI:
MSPs accomplished a V-shaped recovery in 2020, with both revenue and profit on the rise in Q3 and Q4 after a disastrous Q2.
OPERATIONALLY MATURE MSPs cut costs, leaned into sales and marketing, and selectively eased financial terms for customers.
MANAGED SERVICES and an MRR model sustained MSPs through a quarter of dried up projects and lower hardware/software sales.
REMOTE WORK, CLOUD, and increased need for cybersecurity will be permanent fixtures of the “new normal.”

INDUSTRY LUMINARY Paul Dippell likens the massive effort by MSPs to help their clients at the start of lockdown last year to the Berlin Airlift during the early days of the Cold War. While MSPs weren’t flying in food, water, and medicine to a West Berlin under siege, they were providing a lifeline to SMBs.

“They just worked 24 hours a day, seven days a week to get their clients in the cloud so they can work from home. And it really was a worldwide phenomenon,” says Dippell, CEO of Service Leadership, publisher of widely respected benchmark the Service Leadership Index and now part of ConnectWise.

Then they hit the hard, cold reality of keeping themselves in business through an economic downturn that still lingers. For an industry that accomplished a V-shaped recovery, it’s worth examining the short-term maneuvers, long-term business model decisions, and cultural attributes that separated channel pros who struggled from those who are thriving in the “new normal.”

The initial work-from-home rush created a spike in project work and a smaller uptick in revenue through April, according to Don Baham, president of Kraft Technology Group, an IT solution provider in Nashville, and a branch of the KraftCPAs family of companies. “Then, to be honest,” he says, “it really went off a cliff for a couple months.”

“Pretty much everybody had a terrible Q2,” confirms Dippell, who adds that the average MSP in Q1 2020 had reached a revenue height of 15% above Q1 19, “which was the highest our entire population around the world has ever reached, which is great. Then COVID hit.” The average MSP had 0% profit growth in Q2, and revenue contracted swiftly too, he says. However, both revenue and profit were on the rise again in Q3 and Q4. “That’s a V-shaped recovery.”

Baham saw a similar trajectory. “Summertime moving towards the end of the year, people started coming back to conversations that we were having that first part of 2020 or in 2019,” and put projects back on the roadmap. In addition, Kraft Technology Group signed some new customers during that time. In the end, 2020 marked the best revenue performance—a 45% increase—that the MSP has had in several years.

Dippell says the MSPs who cut expenses as deeply and as quickly as possible, and then leaned into sales and marketing, were able to “catch the first breath of a revenue rebound,” which brings profit back.

Indeed, when COVID hit, the first thing Anthony Oren, CEO of Nero Consulting, an MSP in New York, did “was double down on my sales and marketing efforts.” While his firm did take a revenue hit from its hospitality clients, Oren says that 2020 was Nero Consulting’s best year in terms of sales.

In general, Dippell says, MSPs at a higher Operational Maturity Level (OML), the Service Leadership benchmark that measures a variety of attributes, did better than less mature peers. Among other things, they “have better information about what's going on in their own company … from a profit and loss and revenue and expense standpoint,” he explains.

Shawn Walsh, a former MSP and CEO of Encore Strategic Consulting, a coaching and sales development firm in Bedford, N.H., agrees with Dippell. “Many of the MSPs I work with have actually seen double digit growth [in 2020], both in top-line revenue and bottom-line profits,” he says, adding that “those numbers had more to do with their maturity as a business.”

For example, notes Dippell, while many MSPs made financial accommodations for their struggling customers, those who are more operationally mature did so judiciously by determining which ones needed some short-term leeway to stay in business. Less operationally mature MSPs were not as selective, which led to their own struggles to stay in business. “They all have a heart of gold, but you have to … temper that heart of gold with some cold, steely-eyed rationality,” Dippell says.