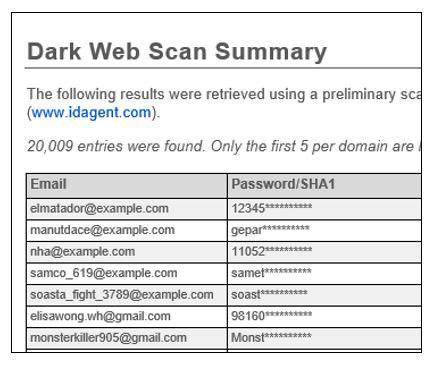 Users of the popular vulnerability assessment tool now receive preliminary information about compromised user credentials at no additional cost. The integration is the first of roughly a dozen coming from ID Agent soon. By Rich Freeman
Tweet

Under an arrangement between the two companies in effect now, Network Detective automatically checks end user domains against ID Agent’s database of stolen user credentials. The system’s vulnerability reports will then display up to five email addresses and passwords per domain, as well as an aggregate count of all vulnerable credentials associated with that domain, alongside the information about wireless network safety, security policy consistency, and other issues that they provided before.

The result for Network Detective users will be a powerful pre-sales tool for use in client presentations, according to ID Agent CEO Kevin Lancaster. “It really drives home the security point and it really helps the MSP sell additional cybersecurity solutions,” he says.

“It’s very visceral,” says Mark Winter, vice president of sales at Atlanta-based RapidFire Tools, about ID Agent’s data, pointing to the individual email addresses and redacted passwords it displays in particular. “It’s impressive to be able to share that information with somebody.”

The more than 6,000 MSPs who currently use Network Detective will receive the new functionality at no additional cost. “We like to try and add additional value as we do more and more things,” Winter says.

Users interested in getting complete data for a customer from ID Agent can purchase a license to the system via a specially constructed website.

Lancaster credits channel pros for the inspiration behind the alliance between his company and RapidFire Tools. Conversations with mutual partners at industry events revealed that many MSPs were using Network Detective and ID Agent in tandem to spot problems both inside the network and beyond it.

“This was really partner driven,” he says. “They started to basically do it on their own and we said let’s make it easy for them.”

First sold to MSPs in May of last year, ID Agent already had more than 800 partners as of August. According to Lancaster, the vendor plans to roll out integrations linking its solution with ConnectWise Manage, Datto Inc.’s Autotask product, and other leading PSA platforms over the next several weeks. The goal will be automating the discovery and triage process for compromised credentials so technicians no longer need to switch between separate interfaces when performing and acting on dark web scans.

“They all use different tools,” Lancaster says of MSPs. “If you really want to support them and really support the ecosystem you have to be able to integrate into not just one or two but into the many that our out there.”

In all, he continues, ID Agent has roughly a dozen integrations headed for market soon.

IT management software vendor Kaseya Ltd. purchased RapidFire Tools earlier this year, and currently operates it as stand-alone business unit with its own brand and products. Kaseya plans to embed a modified version of Network Detective inside its IT Complete platform at an unspecified point in the future.