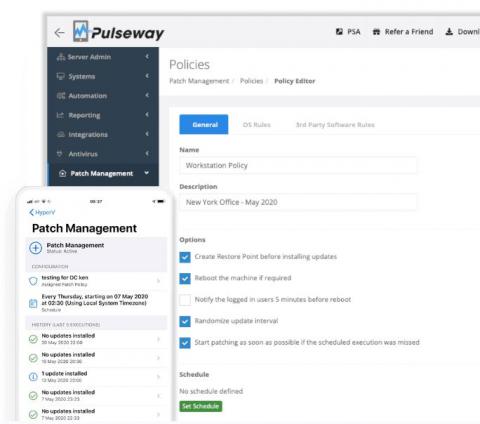 Pulseway Patch is designed to serve as an affordable, easy-to-use option for MSPs and IT departments that either don’t have an RMM solution or don’t like the patching tool their RMM solution provides. By Rich Freeman
Tweet

IT management software vendor Pulseway has introduced a stand-alone version of its patch management system.

Called Pulseway Patch and available since last week, the new tool is designed to serve as an affordable, easy-to-use option for MSPs and IT departments that need to secure operating systems and applications on employee endpoints but either don’t have a full-blown RMM or don’t wish to buy one.

“If you are a startup MSP and want to get going very fast with a very user-friendly and reliable patching solution, this one’s for you,” says Marius Mihalec, Pulseway’s CEO. Mature MSPs who are invested in an RMM but unhappy with its patch functionality are a potential market for Pulseway Patch as well, he adds.

The new system comes with most of the features provided by the patching add-on that Pulseway first made available to users of its RMM solution last April. Those include mass deployment, workflow automation, and centralized multi-tenant management, as well as support for Microsoft Windows, nearly 90 third-party applications, and both niche and custom applications. Support for Apple’s MacOS is due later this year.

The system does not yet integrate with PSA applications, but will acquire the ability to create tickets in the future.

Though development of Pulseway Patch was underway before the arrival of COVID-19, according to Mihalec, the security challenges created by the pandemic, which has forced millions of people around the globe to work remotely, have made patch management a more urgent priority.

“More than ever, organizations need to ensure that all the workstations connecting to the company network are safe,” he says.

According to Mihalec, the decision to turn what was once an add-on into its own product as well underscores the depth of Pulseway’s commitment to continually expanding and enhancing its patch management capabilities.

“We will add a ton of improvements to it,” he says.

In a move more specifically tied to the COVID-19 crisis, Pulseway released a remote support solution for MSPs and businesses with work-from-home employees in April.

Jabra PanaCast Review - Get Your Huddle On
END_OF_DOCUMENT_TOKEN_TO_BE_REPLACED