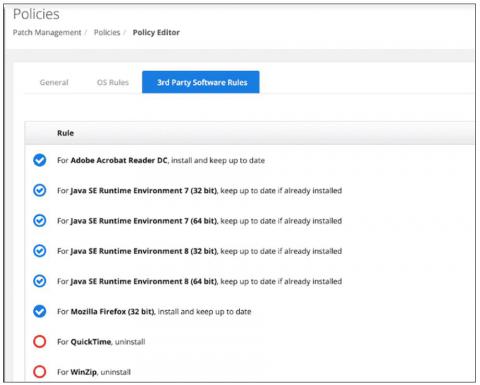 Available now at no additional cost to users of Pulseway’s RMM, PSA, and other business systems for MSPs, the new functionality lets users apply patches to specialized, custom-coded, or other solutions not on the vendor’s list of supported applications. All users need is a URL that points to an .MSI file, according to Pulseway CEO Marius Mihalec.

“We’ll download it and analyze it, and we’ll make sure to deploy it for you,” he says. “The whole process is automatic.”

Pulseway’s platform has allowed MSPs to patch applications, in addition to operating systems, since last April. At launch, that feature supported a defined roster of 19 products, including Adobe Reader, Mozilla Firefox, and TeamViewer. Since then, systems like Office 365, Slack, and Zoom have joined the list, which presently contains 64 titles in all. Pulseway adds more names every week, but prioritizes widely-used products over the niche or custom solutions many MSPs must also support for their customers.

“This provides them a shortcut to put them on top of the list,” Mihalec says. The only standard patching functionality not currently available for user-provided patches is the ability to uninstall updates.

Support for user-supplied patches is the first of several product enhancements due from Pulseway in 2020. The next one, due toward the end of Q1, will introduce automated workflows for resolving technical support issues. Triggered by alerts, those procedures could attempt to restart a disabled service, for example, or redo a backup that failed. The goal, according to Mihalec, is to help MSPs get more done faster without adding staff.

“Efficiency is one of the things that we will be focusing on a lot throughout 2020,” he says.

The new feature will come with a graphical, point-and-click interface that users can employ to define complex if-then sequences with multiple resolution paths. “There’s no scripting involved,” Mihalec says. To further ease adoption, Pulseway plans to provide a library of pre-configured workflows as well.

A new network monitoring engine, designed to help MSPs automatically discover and monitor hardware other than traditional endpoints like PCs and servers, is also slated to arrive this year. Supported devices will include switches, access points, routers, and printers, and the system will alert users whenever new such items join the network or previously detected ones drop off it.

Further changes set to arrive this year include remote control and application patching for Macs and the addition of PSA functionality to the platform’s mobile app. Remote control has been possible via the mobile app since last November.

Users will also soon be able to deploy, manage, and configure security solutions from Bitdefender. The platform provides similar functionality for products from Webroot and Kaspersky already.

Pulseway currently has roughly 6,000 partners in all today, 65 to 70 percent of whom are located in North America.

ChannelPro 5 Minute Roundup for the Week of June 7th, 2021
What Can Businesses Do to Fill the Cybersecurity Talent Shortage?
How to Study for CompTIA Cloud+
END_OF_DOCUMENT_TOKEN_TO_BE_REPLACED

Jabra PanaCast Review - Get Your Huddle On
END_OF_DOCUMENT_TOKEN_TO_BE_REPLACED