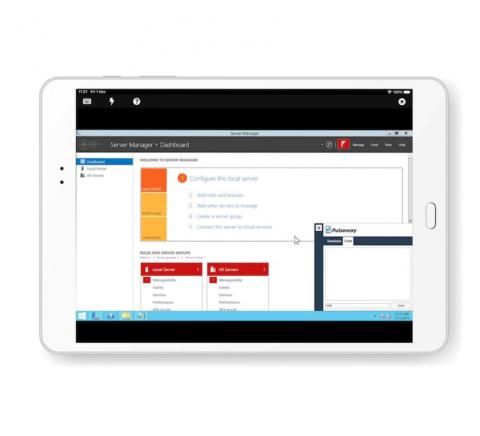 Much requested by users, the new feature lets technicians control endpoints and conduct support sessions through the same mobile software they already use to perform other remote management tasks. By Rich Freeman
Tweet

Pulseway, a maker of RMM, PSA, and other solutions for MSPs, has added remote control functionality to its mobile app.

The new feature, which is available now at no extra cost to existing customers, lets technicians control endpoints and conduct collaborative end user support sessions through the same mobile software they already use to perform other remote management tasks. Previously, they had to use a Windows-based remote control application called Pulseway Remote Control or a third-party product.

“From any iOS or Android device from within our app, you can now quickly jump in on any remote desktop session,” says Pulseway CEO Marius Mihalec, who notes that the ability to open remote sessions through the mobile app been one of the most requested enhancements among MSP users.

Pulseway Mobile Remote Control, as the new functionality is officially known, lets users view all active remote sessions on a device and join an existing one if they wish rather than start a new one. That allows multiple technicians to participate in the same session simultaneously.

Pulseway’s mobile remote control software currently does almost everything the desktop application can with the temporary exception of a few features, including the ability to transfer files. Those capabilities are in development now and will be added to the system in the future.

Mobile-first functionality has been Pulseway’s calling card since its earliest days. Mihalec wrote the first edition of the company’s RMM solution some eight years ago for his own use back when he was an IT administrator in Dublin, Ireland, frustrated by his inability to find an app that let him manage systems from his iPhone. Adding remote control to the app he subsequently created closes the last significant gap in what users without access to a PC can perform from a smartphone or tablet instead.

“They can really do pretty much everything that they have to do from anywhere and also don’t have to use a different tool to achieve this,” Mihalec says.

Pulseway Mobile Remote Control integrates with the company’s two-factor authentication tool, which it updated significantly in August. Concerned about escalating threat activity against MSPs, Pulseway has been urging users to implement 2FA ever since.

“We’re trying to educate our customers with every newsletter or message that you guys are being targeted [so] you need to be proactive and enable that,” says Mihalec.

Initially, 2FA adoption was voluntary among Pulseway users on an individual basis. Last month, the vendor gave administrators the ability to enforce 2FA company-wide as well. Step three in the 2FA rollout process will be making the technology mandatory for all users at all customers. Mihalec expects to put that change into effect within the next two months.

“At the end of the day, it’s their business on the line,” he says. “We feel like we have a responsibility to help here and encourage them to establish best practices to secure themselves.”