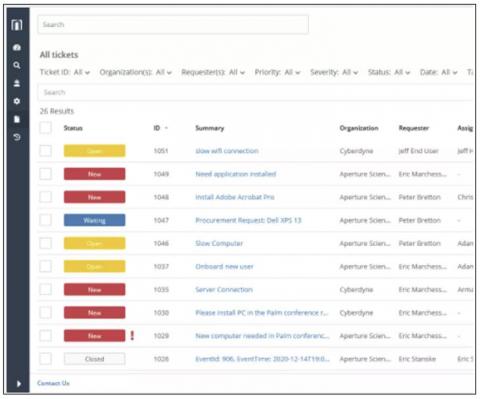 NinjaRMM is adding a ticketing solution to its growing toolset for running a managed services practice.

Users can create time- and event-based triggers as well to execute specific steps under pre-defined conditions. Actions can include routing tickets to ticket boards for prioritization or sending customers who haven’t replied to a support email in a set number of days an automated follow up.

Behind the scenes mapping functionality automatically tracks relationships between tickets, devices, users, and organizations, and allows technicians to view device health, performance, and ticket status at the global, company, and individual device level through a single dashboard.

A self-serve ticket portal, meanwhile, lets customers create tickets, update them, provide additional context, upload attachments, or mark tickets resolved. On the MSP side, users can create multiple resolution workflows so that tickets filed by a client’s owner or executives, for example, are handled differently than those from other people.

Ticketing is the latest addition to a platform that gained a backup solution just over a year ago and documentation functionality in July. Ninja plans to integrate the new tool with all of its other systems by the time the 1.0 release reaches market, according to Michael Shelton, the vendor’s vice president of global training and support operations, who is also product owner of Ninja Ticketing.

“The absolute expectation is that there’ll be a full integration with our entire suite of products, including the documentation,” he says.

Ninja’s RMM software will continue to integrate with ConnectWise Manage, Datto’s Autotask PSA, and other third-party ticketing solutions as before going forward, Shelton continues. “[MSPs] have different tools that they want and they love and they like to use, and nobody likes being told you absolutely can’t use this anymore,” he says. “Some people may not necessarily love the tool that they’re using right now, and if that’s the case, then we think that our platform is going to be very attractive.”

Pricing for the new system, and whether or not RMM users will even be required to pay extra for it, have yet to be determined.

Ticketing has been part of NinjaRMM’s strategic vision since the company launched the first edition of its RMM platform late in 2015, Shelton says. “We wanted to do it when the time was right, when it made sense to allocate resources, and when it made sense for us to be able to take the time to do the investigative research to be able to create something that was truly a Ninja product that was intuitive, that was easy to use, and that people didn’t mind staring at all day.”

That time came roughly two years ago, he adds, noting that the company has collected feature requests and feedback from hundreds of users since then, and drew heavily on that input during the development process. Ninja built the new system, like all its software, entirely around in-house intellectual property rather than acquire a ticketing vendor, according to Shelton, so it could closely control every aspect of the product’s design and operation.