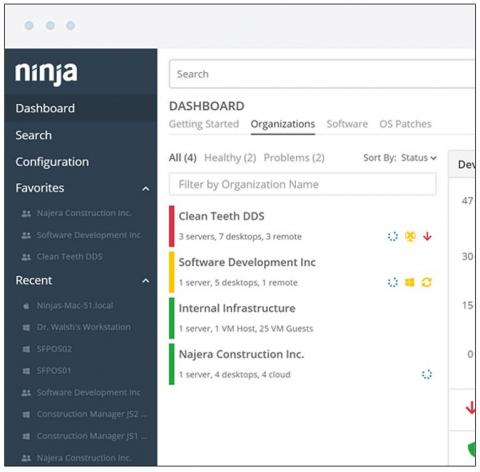 NinjaRMM has shipped a new edition of its RMM solution that for the first time includes built-in documentation and password management functionality.

Officially unveiled today, version 5.2 of the vendor’s flagship application has been available to Ninja users and partners since Monday. It’s the second update of the year, following an earlier one in March.

The documentation feature, which is included in the product at no extra cost, allows technicians to collect, store, and view information about organizations, devices, networks, Active Directory implementations, and more. The system comes with an extensive library of templates for documentation forms and is highly customizable, according to AJ Singh, Ninja’s vice president of product management.

“It’s super flexible, super granular, and you can pretty much present data in a thousand different ways,” he says.

Such features are a substantial down payment on Ninja’s initial plans for documentation, which include additional reporting capabilities, a product knowledge base, and the ability to grant access rights to end users. “There are a lot more advanced features coming down the line, and we plan to be fully baked by the end of this year,” Singh says.

Adding documentation capabilities to the NinjaRMM platform, Singh emphasizes, has no bearing on the system’s existing connections to documentation solutions from Kaseya’s IT Glue unit, N-able, and Liongard. “We would never take away the tools they love,” he says of the company’s MSP users. “We still have awesome integrations with the other documentation vendors, but this is something we are adding on top of it.”

That said, he continues, employing Ninja for documentation will allow users to simplify workflows by consolidating information in one place. “All your organizations, all your devices, all the information about the entire customer base, all that resides within the same platform, so you don’t have to either manually or automatically map those assets between different interfaces,” Singh says.

Other makers of RMM software, including ConnectWise, Datto, Kaseya, and N-able, continue to build and expand increasingly comprehensive suites of line-of-business software for MSPs. ConnectWise, for example, introduced a solution for managing third-party BDR solutions last month. Datto added documentation to its Autotask PSA solution this year, and acquired a threat detection vendor in March. N-able, for its part, announced plans to add sales quoting software to its portfolio several weeks ago.

Ninja, which long concentrated on RMM software alone, has been expanding its capabilities lately as well. In addition to documentation and password management, the company has been offering backup functionality since last August.

Other enhancements in Ninja’s 5.2 edition include the ability to define custom fields. “You can pretty much monitor any data on the planet that is not natively monitored by Ninja,” Singh explains. Examples include asset tag numbers, serial numbers, CPU temperature, and fan speed.

Companies can apply custom fields globally to all of their devices under management or only to defined subsets of that hardware. Users who wish to track BitLocker encryption keys, for example, can provide that field only for Windows-based endpoints. Utilizing Ninja’s API, MSPs can create custom fields based on data imported automatically from external applications as well.

Welcome to the Year of the Predictable
END_OF_DOCUMENT_TOKEN_TO_BE_REPLACED

LG Gram for Business 17 (2020): Big Reasons to Like It
END_OF_DOCUMENT_TOKEN_TO_BE_REPLACED