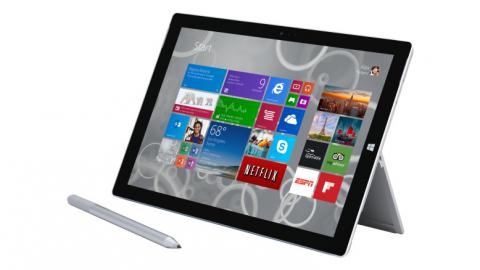 Microsoft CEO Satya Nadella and VP of Surface Computing Panos Panay took the stage this morning at a press event in New York to reveal the most advanced Surface Pro device yet. Surface Pro 3 refines Microsoft's vision for creating a no-compromise device that can replace the laptop entirely, and while not a radical departure from Surface Pro 2, the third-generation Pro touches and improves upon its predecessor in some key areas that may just make Microsoft's "one device to rule them all" goal possible.

You won't mistake the Surface Pro 3 for any previous model, thanks to its new 3:2 aspect ratio, "Pixel-Free" 12-inch display (2160x1440). The new 3:2 ratio is intended to significantly improve the Surface Pro 3's usefulness in portrait mode for activities like writing. In fact, Microsoft made many comparisons to pen and paper to illustrate some significant advancements to the bundled digital pen. On the technology front, the Pro 3's optical stack has been made thin enough to remove the parallax effect, which simply means that the ink on the screen looks much closer to the tip as you write, that has plagued the writing performance on all previous devices. Combined with the new aspect ratio that mimics the size and shape of a paper pad, heavy integration with OneNote, and optimized applications like a new Photoshop from Adobe, Microsoft believes the Pro 3 is the most natural device for writing and digital art. 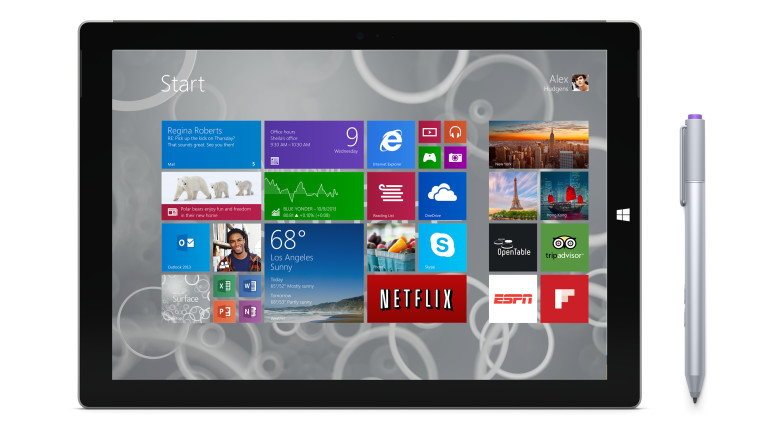 The extra size screen doesn't come at a cost of weight (or thickness). According to Panay, Surface Pro 3 is the thinnest Intel Core i device in history at 800 grams and 9.1mm thick - a feat that required the design of more than one-hundred custom components. He didn't list them all, instead choosing to zero in on a new custom fan that the user won't see, hear, or feel, but still radiates enough air to keep Intel's Core i7 cool - a new option over the i5 in the Surface Pro 2. Even with the i5 performance is improved by over 10%, and even more with the i7. Those looking to cut cost will be able to pick one up with an i3 processor, at the expense of some speed.

The integrated kickstand has always been a hallmark feature for the Surface, even if some have found the one (Surface Pro) or two (Surface 2) position stand to be somewhat limiting. The Surface Pro 3 changes that with a brand new "friction hinge" that allows for virtually any angle between the classic 22.5 degrees and a nearly-flat 150 degrees, which should alleviate any complaints that the hinge isn't flexible enough. Furthermore, there's a new-and-improved Type Cover that boasts a vastly improved trackpad and extra magnets that attach to the bottom front of the Pro 3, further improving its stability when used in a lap. 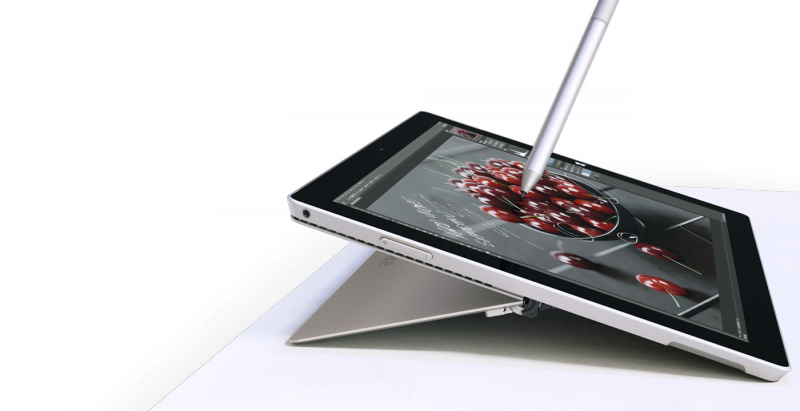 Microsoft's isn't the only company building 2-in-1 PCs, and some OEMs have revolted by getting further entrenched with Google and Chromebooks with Microsoft stepping into the hardware market. Nadella made the case that Microsoft isn't trying to compete with their OEM partners (although it's inevitable it will to some degree). Microsoft clearly has its sights set on going after Apple's customers who would pick up a duo of Air products, the Macbook Air and iPad Air, at the ultra-high end of the market where few of their OEM partners play. The Surface Pro 3 is certainly more expensive than the iPad Air and similarly priced spec-for-spec to a Macbook Air, but really shows its value as a replacement for both. It's thinner and weighs a lot less than the two combined, although the 9-hour run-time isn't quite as good.

Full specs on page 2, and more images in the gallery below.

why would anyone buy the Microsoft Surface Pro when you can buy the Samsung Galaxy note 12.2 and get a much better and higher spec tablet?.
Microsoft should stick to making software not hardware.